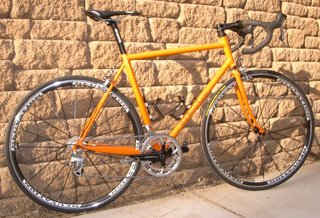 So here's the second part from yesterday's post, the bike. As I mentioned I finished one up this weekend, built it up Tuesday and delivered it last night. This one was a bit more fun than usual for a couple of reasons. First off, it was built for a good friend who'll be using it to compete in the Madison Ironman this year and secondly, it's an actual full-on racing bike, which I don't get to build as many of.
The flashy orange paint job is what really get's your attention first, but there are a few other details that make it fun too. 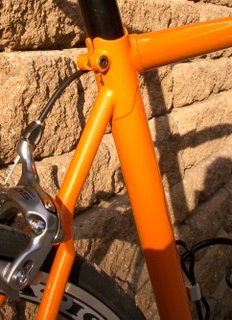 The frame is mostly Columbus Life tubing, built with Slant Six lugs. I 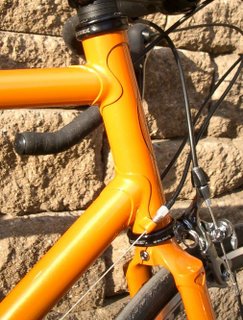 really like these lugs the more I use them. They've got plenty of material where I want it and have a nice general shape right out of the box. I tend to carve off some meat on the headlugs, but the seatlug is great for fast-back stays or a wish-bone stay like this one has. There's a nice sized area on the back of the lug to fit the mono-stay. The more I look at this frame, the more I like the wish-bone stays when combined with the sloping top-tube.

I built it up for the customer as kind of a budget racer. He didn't have a pile of cash to throw at it right now, but needed it to be good enough to race an ironman, so I put together a unique group of parts to save some cash, but give him a good solid foundation that can be upgraded later. 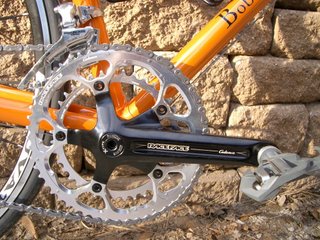 The drivetrain is all 105 stuff, with the exception of the crank. I opted to sub in the new Race-Face Cadence road crank instead. It's got a nice integrated BB with external bearings like the shimano offerings, but I think looks much better, weighs less and is a bit cheaper. The Canadians seem to have really made a good product here, I wish their off-road cranks had as narrow of a Q-factor as these.

For wheels I opted to spec out Neuvation M-28's. You probably haven't heard of Neuvation, it's a one-man company making some really nice overseas built wheels. The parts in the wheels are impressive and he basically has zero overhead, so that keeps his pricing down. If you're looking for wheels on your new BBC, let me know, it's virtually impossible to beat the deals on these.

This one will be put to the test pretty fast, the new owner, Deanwood, and myself will be putting in a 115 mile ride tomorrow. I don't think any of us are really prepared for it, so that should be interesting. I'm really hoping it's dry and not as hot as it's been, I'm still nursing some sunburn from the past weekend.