I've been meaning to write a summary post of my first winter of fat-biking for a while.  Now that spring is pretty much here, I'm finally getting around to it.  This winter was pretty terrible as far as MN/WI snowfall went.  Usually I spend the winter xc skiing but there just wasn't snow so I opted for fat biking.  I have to say it was the best move I could have made. 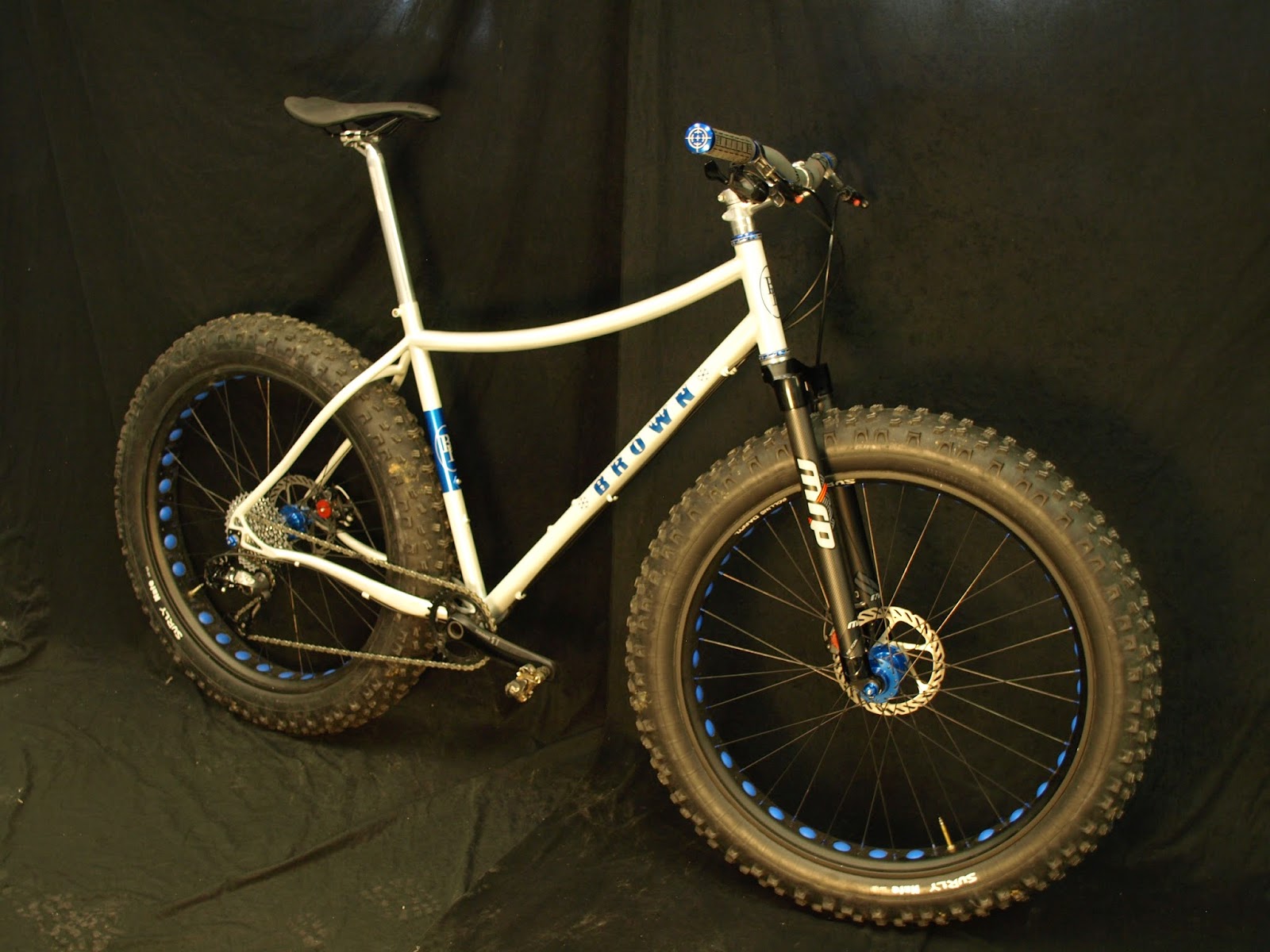 People who know me know I've been pretty skeptical about fat bikes in general. Every one I had ridden felt like a big, slow, clunky bike with a horse riding-esq pedal position.  My goal with building this bike was to overcome all those.

I feel the biggest single problem with most fat bikes is simply the ridiculously wide BB which positions the riders feet too far apart for efficient pedaling.  I knew from the start I wanted this to feel racier for hard-packed trails (ie White-tail ridge). It's not meant for all day trekking through deep powder,

For those reasons I limited the tire size to a 4" tire on a 80mm rim, that's plenty big enough for hooking up on anything other than deep unpacked stuff.  I also knew I would be fine with a single front chainring.  1x set-up's have gotten so good now I just couldn't see a need for a front derailleur.  With those constraints I did some detail design work and researched cranks.

Most modern MTB cranks flare the arms out much wider than needed for reasonable frame designs, normally I hate that feature as it makes the Q factor unnecessarily wide, but for this application it's an advantage.  All that extra flare leaves room to move the single chainring further outboard and still allow the chain to clear the crankarm.  With some custom machining I was able to move the single ring about 1cm further outboard than stock.  That combined with a 170mm rear axle spacing and some very heavily shaped chainstays I was able to cram it all in there:

Standard 73mm BB shell with Sram X1 cranks, 4" tire on a 80mm rim, full 10 speed cassette, and the chain clears the tire in all gears.  There is about 6mm of tire clearance to each chainstay and 4mm to each crank arm.  In a nutshell, it's very tight but it works! 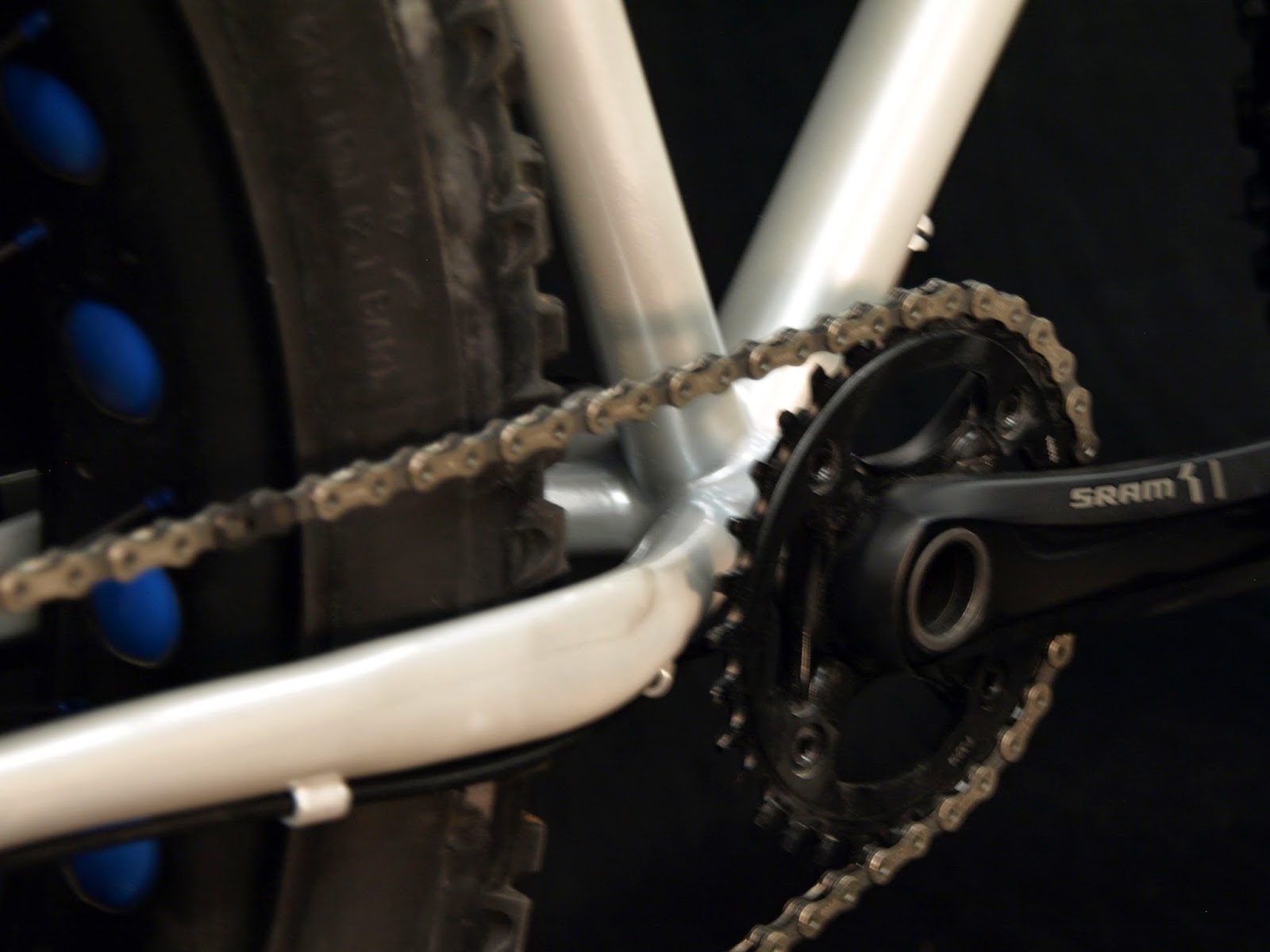 The geometry is also more mtb-like.  A little faster front end handling, lower bb drop.  Between the lower drop and narrow q factor it feels pretty much exactly like you're riding a 29'er just with a lot more float and traction!  It's not just me, everyone that has ridden it says they're shocked how much it feels like a "normal" mtb.

The trade-offs are the tire width limit, but for packed trails it works great.  If you like to wear loose pants, they may rub the rear tire since your pedals are closer to the tire, but with tights it's not an issue.  Lower drop would make your feet drag in deep snow in the powder, but as I said it's a packed trail bike.  I think for it's purpose, this design cannot be beat!  It's completely changed my notions about fat-bikes.