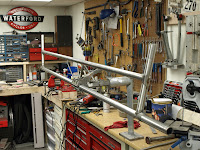 Yeah, I'm still building bikes, but in between I've been working on a side project for a local Mlps Architect. It's a fully lugged stainless steel bike rack. Not a rack to go on a bike, but rather a rack to hang bikes from indoors! Actually I'm making 2 of them and I'm pretty excited to see how they come out.

It kinda looks like some kind of odd long wheel-base recumbent in this shot, but eventually that'll be hanging on a wall.

Click on any of these for big. The lugs started out as mini-six stainless lugs, then I've been adding points on them all over and reshaping them. Adding material to stainless lugs adds a whole new challenge because I have to tig weld the extra material on instead of brazing it. Otherwise you'd see the silver line on the lug where the extra material was added. 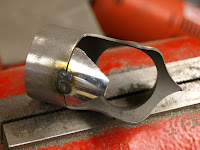 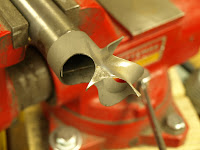 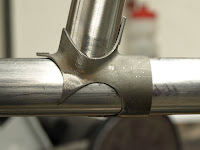 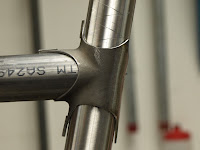 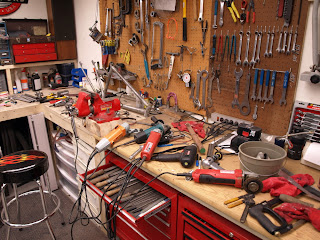 It's also pretty thick tubing, .0625" wall, which makes silver brazing the much thinner lugs on a bit of a challenge too, but so far so good. I've got one of them mostly brazed up, but I've still got to clean it up and then make another one!

This rack project is taking it's tool on the shop, it's a mess. I've never spent so much time grinding with so many tools. I can't even see the bench through the grinding dust. 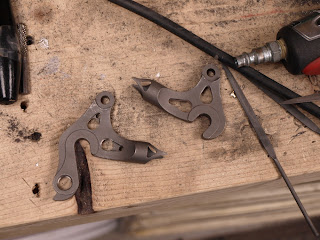 I've also been working on a another frame and a frame repair. Spent a little time this afternoon fancy-ing up these stainless steel dropouts by carving out the windows.
I've still got to polish 'em up and clean them, but I think they'll look pretty nice. These dropouts used to come with windows cast-in years ago, but they stopped doing that, so now I've got to cut them out by hand to make them look nice. Sigh, just more work.... 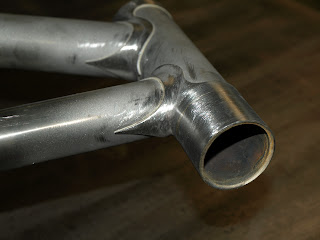 Still going strong in the shop, got Billy's mtb about half done now. Coming out pretty well for a bike with some serious lug tweaking. He needed about a 15 degree slope on the top-tube, so I needed to really "adjust" the lugs to make things work. Came out great.
I'll get some more pictures up here soon.
I'm starting on another neat project as well, a stainless steel bike rack. Not a rack that mounts on a bike, but rather a rack for hanging bikes indoors. It's a project for a Mlps architect, for a new office building downtown. I'm pretty excited to see how it comes out.
Band had a good show Friday night. We played at Memory Lanes in Minnapolis. Great turn-out for us, but unfortunately they cut us pretty short, so we couldn't fully rock the place. But we'll be back there soon with a longer set, so keep your ears open.
Been playing with my new camera a little too, and with trying to get better lighting for shooting bikes. I rigged up a little light booth with an old light diffucing shade and took the pictures for an ebay auction I've got going. I think I'm starting to get better at this and hope to apply it to a bike frame soon!
write at you later
bbbb
Posted by Bob at 11:40 AM 1 comment: