Buck hill happened last night, it really happened. I was amped to race after a couple good rides last weekend and a few good workouts this week. I was primed, the bike was primed, the weather was perfect. The Penn boys had set a killer course, running everything backwards with lots of slow grinding climbs through the singletrack. Line up the start right behind Tomac & Stone, had a great line to get a fast start and out front before the bottleneck. Gun goes off (metaphorically), I turn 1.5 revolutions of the pedals and SNAP, I'm on the ground 'n causing everyone to try and get around me. Once the rush has passed I look down to find the belt for my bike laying on the ground. not good, it snapped: 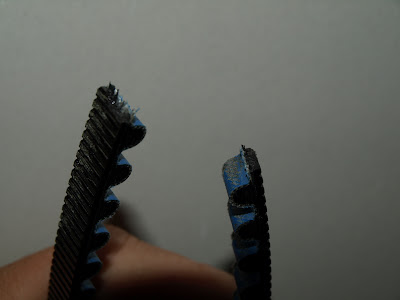 I was completely disheartened, but felt ok despite slamming all my body weight into the top-tube. As I slowly walked back towards the parking lot, Pat Sorenson was talking to me and mentioned that they (Penn) had a 21"Superfly over at the demo tent I could use. At first I just wanted to pack it up and head out, but then I figured: when else do you get to thrash some else's $4000 carbon mtb for a full race? Off to the Penn tent I went, got the bike set-up close to fitting and I set off, about 10 minutes back from the start of the race, but I was riding. Took me almost a full lap to figure out the shifting, it's been a while since I was on a gear bike and this thing had shifter I had never used.
The superfly climbed really well, felt almost as good as my singlespeed (but not quite). Unfortunately it had the worst BB creak I've ever heard, so everytime I'd get out of the saddle, the BB would scream at me. The farther I rode the more I realized the saddle was way too low, so I ended up doing more out of the saddle riding, thus more screaming from the BB.
The geometry on that thing was odd though, considering it was the largest frame they make and I have a very short torso, the top-tube was still too short for me. I've never had that problem on a stock bike, they're always too long. Also had some pretty back swept handlebars which don't help that situation, and which I hate the feel of. All in all, not the bike for me, but I'm thankful I was able to borrow it and at least ride 4 laps.
Finished dead last, but hey I did let everyone else have a 10 minute head start....

I'm sending some pic's off to spot about the belt, and I've got another spare in the shop, so I'll probably give it another go. I suspect there was a defect in this one as one side of the failure looked different than the other in terms of how the carbon fibers broke.

(edit) since my first writing I already heard back from Carbon drive, they're sending my belt in for analysis of why it failed, but it looks like there was some kind of defect in it originally. They were quite concerned about this and making sure I wasn't hurt, and they're sending out a new belt today. I still don't think this is a flaw with the system, just happened to get one that might have been mis-handled somewhere along the way. Their customer service is truly incredible. -BB

And finally, I have done some more shop work, just haven't been updating this blog. Here's a couple lug shots of the frame I just wrapped up (but still needs paint): 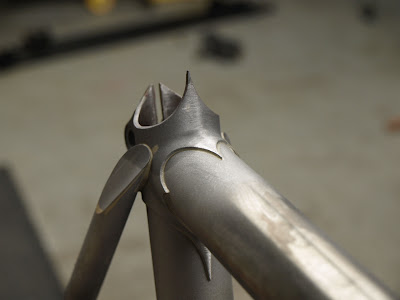 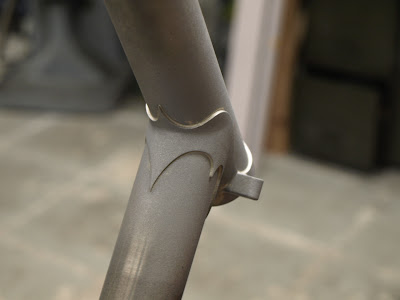 They're Sach's singer lugs, but with the shorelines changed a bit. You can't see the front of the headtube but they're nice tall points out front and the side profile is cut back quite a bit. I'll post more pictures once it's painted. Otherwise this one is pretty much a straight-up road frame, nice and light though with all .7/.4/.7 853 tubing and Zero chainstays.

Yeah, finally a new post here. I just haven't been spending a lot of time time in the shop lately, so I haven't had much bike-wise to write about. I was on the road a bit in May including a 5 day mini vacation to Clearwater Beach. I guess I just needed to get away for a while.

The beach was great, but the rental bikes we were able to find were crap. They had exactly 1 size available. I'm 6'-1" and my sweetie is 5'-2", she fit on these bikes, you can imagine what kind of circus act I looked on them. I should have brought a bike I guess, oh well.

We've been getting out as much as possible on the tandems to try and get some Leadville training in, but I'm getting a little worried. We really need to start upping the ante on training if we're going to finish (note: my thoughts have now gone from the first tandem team to get the big buckle to just getting a silver buckle...). On the plus side, I think we're a great team for climbing. We've been hitting a lot of hills on the road tandem and I think Robin is the best stocker I've ever had for climbing, which will come in handy out west!

The 953 for my next frame in line should be showing up any day. Reynolds still has a 6 week min wait on that stuff, but that's can easily be planned around.

I completed what constitutes an "overhaul" (in my mind) on my fixie this week too. Replaced the tires, cleaned it up and cleaned the chain. feels like a new bike! I'm going to try and get out on a coupld rides this week and then hit Buck hill Thursday. I made the first Buck hill race of the season despite not realyl being in any kind of racing shape. It went better than expected, finishing pretty much in the middle of the expert field. That race went well until I completely popped in the last lap. I'm aiming to avoid a repeat of that this week.