This weekend was my last CX race for the year, and I'm just finally getting into my groove...

MN state CX championships happened at Basset Creek Saturday with a slightly modified structure. They split the B race into 2 race, B1 and B2. The B1 race was cat 4 and singlespeed classes 35 minutes long, the B2 was Cat3 and 45 minutes long. This brought up a dilemma for me, race singlespeed class or do the cat 3 race on my singlespeed or do both. In the back of my head I was thinking the both option would be best, after all it is the last race of the year.

Now backup a little: I was traveling for work most of the previous week which prevented me from riding or really getting in any exercise at all the whole week. I had flown back to MN Friday and the band had a late show at the Terminal Friday night. I had gotten up at 5am Friday morning and went straight thru till 2am Sat morning with the show, so by 10:30 am when I rolled into Basset Creek, doing 2 races was losing appeal. Also since I was running late and would have had to just jump right into the singlespeed race, I opted for the cat 3 race.

I think I made the right move. The start was a little odd, there weren't any of the familiar faces I was used to, I think everyone I knew raced the B1. Having a singlespeed race drew a lot of people out, there were only 2 of us (that I saw) in the B2 with singlespeeds, but that's fine gears don't help a ton on a course like this.
Gun went off and we rolled out the dirt road. Seemed like a surprisingly slow roll-out to me, so I weaved as much as I could to get towards the front. Got boxed in most of the first lap so I stayed where I was and rode comfortably, getting a feel for the group. After that I decided I should pick it up and just started slowly picking people off. The stairs run-up was really my friend this year, all that running training really paid off. I finally got to the point where it seemed I was riding with the folks who were at my same speed after about 4 laps, I stuck with the same guy for the next 2 laps. At the end I decided I had a bit left in me, so I did what I could and passed a few more on the run-up and coming in for 20th place. Doesn't sound impressive, but for me these days that's pretty good. Looking through the results it looked like I was about 15 places higher than most of the folks I'd been finishing with all year, so I went home happy. 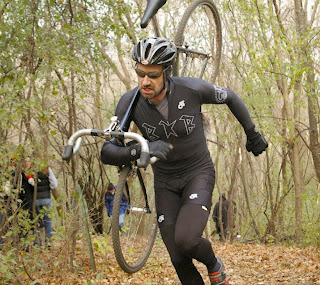 I'm pretty sure I owe it all to Rowntree. He loaned me his BKB "metal" skinsuit right before the start and as soon as I put it on I could feel the power. In fact at the start line someone asked me why I was riding a singlespeed in the B2 race, if I was "too good" for the singlespeed race and another guy piped in that he knew I must be fast 'cause I had BKB across my chest. I guess that guy didn't really know me, or that my last name isn't Lalonde.
I had no choice but to go all out, didn't want to shame that skinsuit. Thanks for the load Rowntree.

Also apparently I must really dig in on the run ups, this is the second pic this season of me looking really pissed off running up the hills, it's where I make up my time.

The Lalonde brothers made the drive up for the race as well, which really added to the fast contingent in the A race. I got a lot of comments and compliments about their bikes and their super-star skillz. They didn't disappoint, Marko coming in 5th and Jesse in 6th. Nice work fellas!

Another interesting note, a guy nobody seemed to know finished third. I kept looking at him on each lap thinking I knew him, but couldn't figure out specifically who he was. Turns out it was Kurt Refsnider, who was one of my skiers back when I was coaching at Champlin Park! Nice work Kurt, good to see you've really found your stride as an athlete. 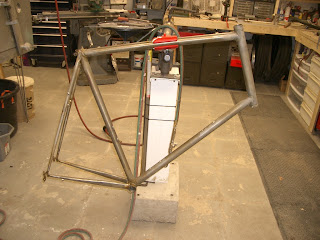 The shop is back in full swing, just finished up the biggest frame I've built to date. It's half painted right now and should be done and assembled next week. This one is a 74cm (yes, that's not a typo) frame. It's got slant six lugs, so the sloping top-tube helps make it look slightly smaller than it is. The headtube is 35cm long, which made for the longest fork steerer I've ever seen.

I had to make the steerer from straight guage 4130 tubing as I couldn't find a butted steerer long enough. Amazingly I was able to find butted main tubes long enough thanks mostly to the 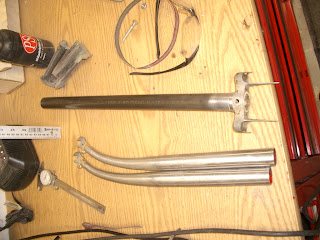 popularity of 29'ers. So the frame is mostly Reynolds 631 tubing, double oversized.

I'll try to get some pictures of this up here once it's built up, it's hard to visualize how big it really is without wheels on it! The owner is one tall guy, I'm glad he'll finally have a frame that actually fits him! Just can't find frames this big anywhere anymore.


Happy Thanksgiving everyone, cheers to another great CX season. 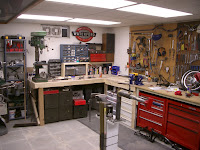 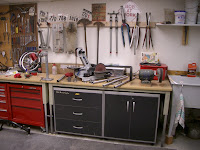 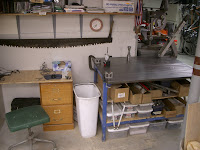 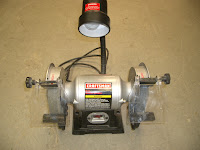 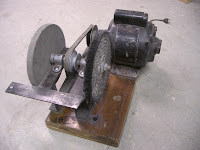 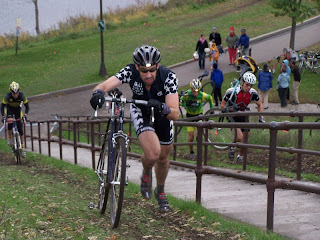