Busy as a bbbb

The holiday weekend just wasn't long enough, so I took the liberty of making it longer. I took Friday off work and ended up taking Tuesday as well. But don't think that me taking a 5 day weekend means long naps at the beach, nope it was productivity all the way. I had to keep up my reputation as the most productive human alive (as Tarik may claim). So...

Friday I stayed home to paint bikes, Yup, bicycles that I built. I've been really crankin lately down in the shop, I managed to crank out a frame last week as well as an S & S retrofit and I had a few other odds and ends to paint up. I spent the morning doing paint prep and masking. The coupler job required just masked panels around the couplers, which in turn means I have to mask the couplers, then nice panels around them and finally the rest of the bike. That's a lot of masking for a touch-up. Then between masking jobs I got distracted by the Miata again. Still trying to make it run perfect, I decided to add a couple gauges so I could check the air/fuel ratio while driving (I suspect it's running lean). Once I got into that, I had the center console pulled apart so it seemed like a prime time to change out the radio too. My old Alpine stereo is fantastic with the exception of one glitch, the knob doesn't work when it's hot or humid. I've tried everything to clean it, but most of the time you just never know what's going to happen when you turn that knob. The one thing you could count on was that the volume probably wouldn't change. So Beth had an older pioneer stereo knockin' around the house for a while, so I threw that in. It has no knobs. Now if I could only figure out how to set the clock and turn off the annoying beep everytime you hit a button. I've installed many many car stereo's and I've never had one beat me in not being able to set the clock like this one has!

Anyway, where was I? Oh yeah Friday. So after that I went for a nice ride on my bike and met up with friend Dean for a spin around St. Paul. We headed back over to the house for some BBQ action afterwards since he hadn't seen the place for a few months. We grilled, hung out, and I gave him a ride home later on. That was the end of the relaxing for the weekend.

Saturday I still had paint work to finish up, so I got up at 7 and started spraying. Finished up all that work by 10 am. Then it was time to get going on outside house projects. The retaining wall was first. The wall was all up, but the whole thing had to be capped yet (those are the finished blocks that get glued down on top of the wall to make it look all purdy). So we made a couple trips to Patio town to get caps since the trailer can only take 1000 lbs per trip. Unfortunately due to the slop of our front yard, the wall is stepped down many times and at each step, you have to split one or two of these blocks to get the spacing right. That means I had to split about 20 concrete blocks. Fortunately I had a great idea sometime back (though not far enough back for me to have used it on the actual retaining wall when I really could have used it!). I still had the electric hammer from my Grandfather. This thing is awesome, it's basically a miniature electric jackhammer. I put the wide chisel blade on it and went to work, it cut the rock splitting time from about 4 minutes of hammer and chisel time with about 30 seconds of power tool use. So I'd fit the blocks up, split them and Beth would epoxy 'em down as we went. Sounds easy enough, but they're 50 lbs each and they're just about all overhead, so it worked over our arms and backs pretty good. 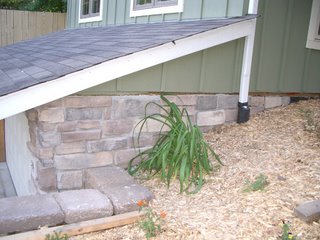 That work took us through early Sunday, then it was time to put on my mason's hat. The stone facing for the garage exterior was next. Up till now, the outside of the walls of the garage had just been bare rough concrete. We bought these cast concrete stones for the exposed faces last fall but just hadn't gotten around to installing them yet. I hadn't done much stone work before so this was a learning experience.

I had to start off with putting metal lathe over the wood header for the garagedoor and then putting down a scratch coat of mortar on that. 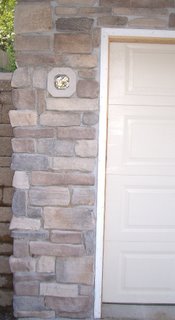 That went pretty good other than the fact that there isn't much room up under the roof overhang to work. Next the directions said to install the corner pieces first and fill in after that. It also claimed that the mortar should adhere fine to the existing concrete surface without a scratch coat on that. I started installing corners at the bottom and worked my way up. about 2 feet up things went awry and stones started falling off and I started losing my patience. As it turned out the mortar didn't adhere well to the older cured concrete, it was just too smooth of a finish, so I ended up propping a lot of the stones in place with sticks and scratchcoating most of the existing concrete. That pretty well took care of Sunday.
Monday we finished up the corner stones and started on the part above the garage door. Those stones held much better since there was a nice rough scratch coat up there. All the stones are different shapes and colors, so the process of piecing them in took quite a while. Infact I thought this would be a 1-2 day job at the most, and it ended up taking 3 so far and I still haven't grouted anything! I stayed home yesterday and finished up the rest of the front face and the side by the sidewalk. 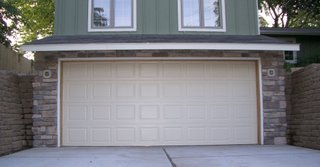 Even though it's not grouted yet I'm really thrilled with how it looks. The stone goes so well with the retaining wall and the colors of the house. It was really worth the effort as I think this is kind of the finishing touch on the curb appeal of the house.
Here's the finished view from the driveway, click on the images for bigger versions. 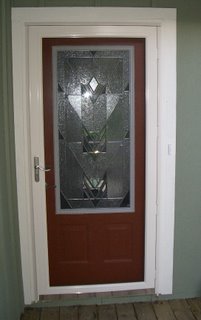 And since I haven't been updating this too much with other house progress, here's one picture of the new front door. We installed this and the new screen door a couple weeks back. Beth put a few coats of paint on the door this weekend too, but it doesn't appear to have adhered properly. So much for the supposed "factory primer" finish on the door, nothing want' to stick to it. It think we're going to have to take it down, scrape this paint off and spray the door. Other than the paint issues, it's great. The stained glass looks really nice inside the house.

Well, I've got more bike stuff I'd like to talk about but I'm about out of writing time, so I'll write about that later. I should have some pictures of my latest frame this week too, once it's all built up.