2007 has thus far proven to be a most ridiculous year. Between my vacation and a lot of work trips, I've had to travel somewhere at least every other week this whole year, sometimes more. The latest destinations were Texas most of last week for a conference and then Bayfield WI for a 4 day weekend of skiing. Texas sucked, WI rocked.

I was down in San Antonio for 4 1/2 days last week at the National Stone, Sand, and Gravel convention. Just by the name alone you should be able to get a rough idea of how exciting it was. I was supposed to be looking for new technologies for 3M, but the show was kind of a bust in that respect, so I had a hard time feeling like it wasn't 108 of the worst spent hours of my life.

Everyone told me San Antonio was a great town to visit, but these high expectations must have led to my disappointment. It's fine, I mean I'd take it over many other places, but I certainly wouldn't seek it out for a vacation or anything. The downtown is clearly set-up for conventions as pretty much the whole downtown area seemed to be hotels. There are 2 main (supposed) highlights to San Antonio: The Alamo, and the Riverwalk. I didn't have time for the full tour of the Alamo, but it looked pretty neat, a nice piece of history right downtown. The Riverwalk however was a pretty big disappointment.
Just the name alone is enough to turn me off. RIVERwalk. That seems to imply it's a river which it most certainly is not. It's a man-made concrete trench, 3' deep that makes a loop through downtown. They run smelly, ugly tour boats up and down it all day and night and the whole thing is lined with fake-old time looking restaurants which are mostly overpriced (I'm sure to cover the high rent of being located on the "river"). Sure there is a river that runs into San Antonio and yes it's technically connected to this man-made "river", but the reality is calling the actual river a stream is giving it too much credit most of the year. It appeared to flow less than an average garden hose, the river was less than 8" wide! 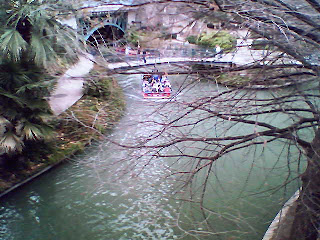 I just can't help but feel like I'm at Disneyland walking along this thing. Here's a crummy picture I took with my phone to give you an idea. The area to the left (where the boat is coming from) dead ends at a shopping mall. The path to the right dead ends at the convention center.
This part is pretty vegetated, which is nice, but most of it is all building and restaurants. There's no fences or guide rails, so I winder how many drunks fall in each summer. Good thing it's only about 8" deep on the edges!
Bayfield was a complete change though, it was great. I honestly wasn't too fired up to leave town again only a day after getting back to town from Texas, especially knowing how much work I need to get done in the shop. But I also really needed a break. We headed north Friday about noon with a couple friends and planned on meeting a few others up in WI. We stopped off in Duluth on the way up for dinner and to hang out a little, ended up there for a few hours, so we didn't get to Bayfield till after dark.
Saturday we skied at Vahalla, which was great. They seem to be in a super-isolated pocket of snow up there. There's hardly any in Ashland, but plenty in Bayfield. Odd. I got to classic ski for the first time this year since there was enough snow to set tracks (none of that in the Cities). It felt great. We kept it short in the morning because we all planned on skiing the Book Across the Bay that night (a 10K race on Lake Superior at night!). That night the weather was just about perfect for skiing, about 15 degrees and clear skies. Unfortunately there wasn't enough snow on the lake to do the usual course, so they made a 10K loop by plowing up a "road" of snow on the ice. So the skiing was on essentially tilled granular ice about 2" deep. It actually made for great skate skiing, really fast and really flat/smooth. I had low expectations of this race since I hadn't actually done a race in years, and I'd only skied a grand total of 6 times prior this season!
The start was chaotic, 1500 skiers in a mass start on a flat lake, in the dark. There was no moon, so things really were quite dark. I started in the middle and worked my way up quite a bit in the first few km's. I found a pretty comfortable pace and just stuck to it and things eventually thinned out. About 8K I was starting to really feel like I hadn't trained at all (which was true) but I figured I could push it through, after all it was only 10K. I managed to finish in a little over a half hour, which was what I was shooting for, so I guess it was a victory. Ended up around 70th place, which I felt good about given my complete lack of fitness.
Sunday we decided to hike out on Lake Superior (really) to check out the ice caves in Apostle Islands Park. They're really sea-caves and they're a very popular destination in the summer for Kayakers. It's quite rare for the ice to develop right on the lake to be safe for walking to the caves, but this year we got lucky! I've got a bunch of pictures, and I'll post some later, but I haven't had time to root through them all and pick out the good ones. Pretty spectacular in the mid-day sun.
Monday we wrapped up with a good ski at Mt. Ashwabay, which was great as usual. Another nice day of classic skiing on nearly perfect trails. Afterwards we headed back, packed up and hit the road. Great weekend all in all!
I came back re-energized, so I hit it full speed in the shop yesterday. Finished up the third Route 29 frame, built and installed the new motor mount platform and motor for my new paintbooth (did I mention I built a new booth in between other trips?) and did an S & S retrofit. Whew.
I also managed to finish up a bunch of new pages and updates to my website, take a look around. I added more information on frames, more pictures, subdivided many sections, and added a new site-map page.
There's finally a page on the Route 29 bikes. It's preliminary, but gives some information, geometry and pictures: http://www.bobbrowncycles.com/route29.htm
I'll be adding more content to that section soon, and The Route will have their e-commerce site up soon with full pricing and buying details for anyone interested. I will have 3 of these on display at the Minneapolis Bike Expo March 3-4th.
So for the 2007 recap thus far:
Traveled to Mexico, California, Texas, Arkansas (soon to be twice), Wausau WI, and Bayfield WI. I've built 5 full frames (which is usually about 6 months work for me) and 4 additional forks, several paint jobs and repairs, built a new paint booth, redone just about my entire website and designed and sourced all the parts for 2 complete runs of production bikes. Makes me dizzy, I hope things slow down a little soon!
Well, I'm out of time to write, as you can see, I have other things to do.
bbbb
Posted by Bob at 7:10 AM 2 comments:

Things are busy as usual here. As part of the barder of the century, I just received my new (to me) Gretsch drum kit. This is in exchange for a bike frame to be named later this summer. I'm pretty excited, these things really sing. Unfortunately that puts me in the really cramped position of 2 full sets of drums and a set of cases in my basement. It's cutting in on my shop space, so things need to go.

If anyone is interested in a really nice set of mid-end drums, here you go: 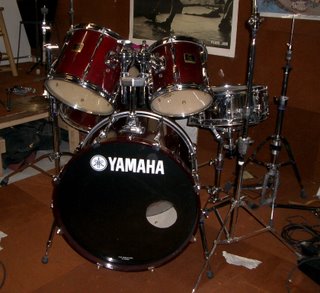 New in 2002, Yamaha Stage Custom Fusion 5 piece drum set. Birch and Falkata shells, beautiful cranberry red birch finish. Toms are 10", 12", and 14" bass is 22", 14" steel snare.
The shells are nearly perfect and the Chrome is perfect. They're in exceptional condition. 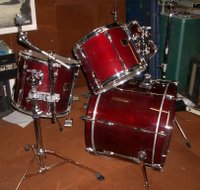 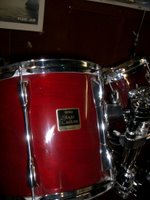 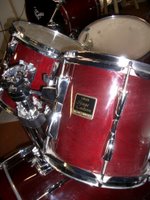 Included are all the stock Yamaha spherical drum mounts (the best out there, really), a Yamaha 700 series stand to hang the 14" tom and a boom cymbal arm for it.
A Yamaha 700 series hi-hat stand in perfect working order, however there is a break in the base casting which has no effect on the performance of the stand.
A Ludwig straight cymbal stand, and a Ludwig snare stand.

I also have a Yamaha 700 series double bass pedal I'd consider throwing in. That would give you a complete package, just add cymbals and you're making music!
I'd like $600/obo for everything you see here, $75 for the double bass pedal.

Or I'd trade the whole shebang straight up for a 80's vintage Grestch Jasper Shell 14 x 6 (or 5.5) snare in Rosewood Gloss finish, but I'm sure that's a long shot.

Help me out, spread the word to any aspiring drummers you know. It's a fantastic sounding kit, really I think about the best you can do for under $1000. Drums new were $900.

In the bike world, I stil haven't finished putting components on the latest 953 bike, just waiting for the Reynolds fork to arrive. I'm about halfway through another route 29'er and built a couple forks. Basically finishing up many small loose-ends and trying to get ready for the Expo in March.

Thanks for all the kind words I've gotten about the latest 953 bike. That stuff really seems to be getting folks excited. I'm pretty psyched to be displaying a 953 frame at the Expo, I imagine it will be the first one most people will have seen in person. 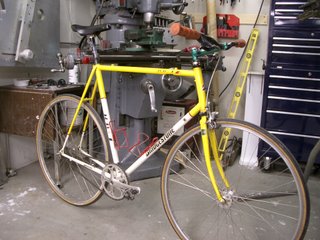 I've also been on a kick to try and get my personal bike sup and running. It seems I've got about a half dozen bikes hanging around here in pieces and I'm tired of it. I got my sweet riser-bar RB-1 fixie back up and running this week. I love how goofy it looks, I think that is part of what makes it so fun to ride.

I suspect this bike is and will be the most ridden bike I've ever owned. It was my only road bike for a lot of years and got thousands and thousands of miles then, now as a fixie it probably still sees almost half my road miles. It just keeps going and going. Yeah, lugged steel.

Alright I'm defintely rambling now, so it's time to run.