I'm really glad this week is wrapping up. Don't know why, but I've just been feeling really tired the last few days. All in all, it was actually a pretty good week.

Monday I got in a great ride. It was a beautiful night when I got home from work, so I headed out on the road bike. I had a plan, I had talked to Beth on the phone before I left and she wanted to go for an easy ride later when she got home, so I was supposed to go out for a short, hard ride and tire myself out, then go easy with her afterwards. So I headed out to Cottage Grove and did pretty much all the big hills down there in big gears. I was more successful at tiring myself out than I had planned and bonked on my way back home to pick up Beth. That was an hour and a half of big hills. Then Beth and I headed out at a much easier pace, headed down to Swede hollow, up Phalen parkway and around lake Phalen, then cruised down the parkway home and that ended up being another hour and a half. Three hours total and I was ready to eat. Beth really wanted ice-cream so we managed to find ourselves at Dairy Queen later that night which provided another funny encounter. We were sitting in the Miata eating out ice-cream when a mini-van pulled up next to us. The Dad driving got out, then his daughter (who couldn't have been over 10) got out, whispered something to her Dad and he nodded, then she came over and told Beth "that's a really nice car, ever since I was a little kid I've wanted this kind of car." She went on for a minute or so and it was so funny, you could just see the Dad rolling his eyes. We laughed.

Tuesday was band night, which was proceeded with some shop-time prepping frames for paint.

Wednesday was my birthday (and my Mom's, happy b-day Mom!), so I decided to take the day off work and do what I enjoy the most: gettin' shit done. I had high hopes of finishing up my 29'er project, doing a repair, and painting 2 other frames. I started off with the repair and had it 90% done when I ran out of gas. Literally. So I had to load up my Oxy-acet. cylinders and go exchange them. I decided to pick up my painting supplies at the same time and grab lunch, so that turned into a couple of hours. Finally got home, finished up the repair and did the finishing touches on my 29'er then got ready to paint. I managed to get everything primed, sealed and basecoated, but was running out of time, so I cleaned up in time for Beth to come home and we went out to dinner. Didn't get as much done as I wanted, but a good day nonetheless.

Thursday, did some more paint prep work, I'm working on finishing up this chaingaurd I made and it's all thin sheet-metal and it's taking more time to prep than I'm used to. I want it to look perfectly flat and smooth, so I've been doing a lot of finish sanding between primers. Then met some friends for drinks and dinner and that pretty much turned into the rest of the night. 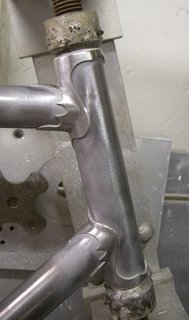 The 29'er project is coming along nicely. The frame and fork are all done, I just need to build the matching lugged stem and then it will be ready for paint. I'm going to put together a simple web-page sort of documenting the construction of this frame since I was able to take pictures along the way. But here are a few highlights until then. To the left is the headtube, just after brazing and a mild clean-up. I'm really diggin' the subtle little side points on the lugs. 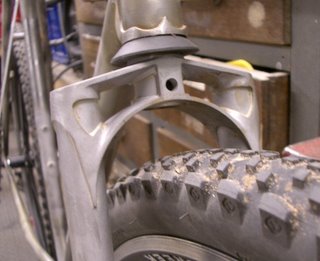 Here's the fork crown all brazed up and ready to rock. I do love those old bridgestone crowns, but man was it a pain to braze and clean up. The casting doesn't have the smoothest shape to it, so I had to do a lot of sanding to get it how I wanted it. The tire shown is pretty small, it's a 1.75" tire, so a 2"+ will nicely fill out the space.

I'll just leave it at those couple pics to tease you for now. I'll get a bunch more up once I make that other web-page. I gotta start thinking about how I want to spec this thing out.

In other news, I updated the sale page a couple weeks back and never mentioned it here, so I thought I would. There's a bunch of new parts on there and even a complete bike, so check it out, buy my junk.

Very Nice!!!! Bob, I am amazed at how much you get done and the very cool nature of it all!