Ok, so I lost steam in finishing up that last posting. And to answer Fride's question, you're a week off, I rode up north the previous weekend and it took me a week to write about it... yes you saw me this past weekend on the on-road mtb ride thing Saturday.

As Fride alluded to there was a supposedly epic ride planned this past weekend. I was pretty excited to actually get to do it and have long rides two weekends in a row! I showed up at CRC at 7:30 right on plan and amazingly there were already other Kenwoodies there. These rides are getting waaay too organized. We had everyone by 7:45 and hit the road headed to the River bottoms.
As usual I was on a mono-speeded bicycle, but unlike usual there were many folks on bikes with those gear-changer-thingy's on them. I had opted to gear up slightly for the ride, but was very much undergeared for what was ahead.

We rode down on roads, it seemed like the long way, but we got there and my legs were about blown from spinning so fast on the pavement. Met up with KK at the entrance and called Fride to find out he and the other Fride had parked at the Bloomington ferry bridge parking lot instead of the lyndale parking lot as they were instructed. So we rode west for a while and eventually hooked up with the Fride bro's. They rode with us just long enough for Gary's chain to break, fixed it and turned back. Probably a good move as we were heading into the nettles area of the trail in order to get to the cedar ave bridge.

It had been a very cool morning when we left and I discovered a great trick for the nettles. I had worn knee warmers and happened to have on thin but tall wool socks. I was able to pull the socks up and the knee warmers down enough to fully protect the legs and got the sweet bonus of looking like a Norwegian xc-ski tourist riding a bike!

Made it through the nettles and onto the cedar off-road commuter trail and took that pretty much all the way to the Mendota Bridge. From here I thought we were planning on hitting the new mtb trails in Medota Heights, but several had timelines to hit, so we all hit the roads back to CRC. Not a bad ride, but a lot of pavement for a mtb ride. ended up being about 4 hours.

Stone and tttt both had new steeds to try out on the ride, both steel geared 29'ers. One a Kelly (RIP) and one a Sycip, both really nice. Kind of gave me the bug to get some work done on that rigid 29'er I've been thinking about. So... 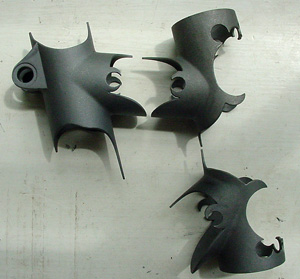 I spent Sunday in the shop, working on putting the finishing touches and paint prep on a frame that's recently been complete. I had a lot of chroming to do to some small parts and all the dropouts, so that took some time, but while letting parts soak in the chrome bath, I started cutting lugs. I've had a set of Richard Sach's Newvex lugs knocking around the shop for a while and I planned to use them on a mtb project and this was it. Here's what they look like as they're cast. I'm really not crazy about the style of these lugs as is, they're supposed to be an updated version of the classic Nervex lugs from the 70's, which they are, but I didn't really like Nervex lugs that much either. So I bbbb'd them up! 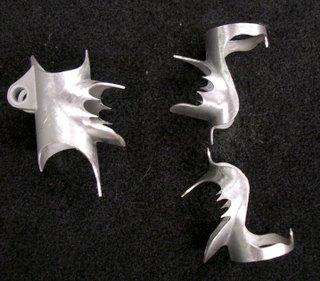 They're actually really nice castings, good job on the design Richard. I just don't care for the rounded points all over them and especially the forward points that wrap the headtube. I went for a little more sleek style with small straightpoints and then really simplified the wraps around the headtube. Oh yeah, they're stainless too, so I'll be polishing them out, should look pretty nice on the finished product.

I'm still unsure about the seat-binder, I'm not crazy about this look, but I'm debating what I'll do to them, I guess it depends on how I attach the seat-stays.


Here's my other pet project from the weekend. I 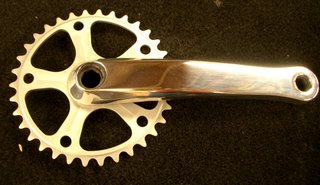 scored a used set of XTR cranks on ebay for $27. They had been sprayed with this awful rubberized underbody coating. Not sure why someone would do that, but they did. No matter, it came off easy in the blaster. Them I went to work polishing up the arms. I've always thought these would be great cranks if they came in a polished version, and I think I was right! These are destined for singlespeeding as you can tell by the spot spiderless ring set-up. I think they'll probably end up adorning the bike with the lugs from above.

I also found out that I should be getting my shipment of Reynolds 953 steel later this summer. The stuff has been impossible to get, so I'm in for the next shipment. I can't wait to try this stuff out, and I've got a few tricks up my sleeve for making some truly one-of-a-kind frames with this, so keep your eyes peeled later this summer.

Thanks for the props, any idea on the bb lenght and part number for this gen xtr with a spot ring to give good chainline.

Tarik, it depends on the chainline of your hub, I've got them on a 109mm Dura-ace BB and it gives a 50mm chainline, which works pretty well with the Chris King rear hub (which has some chainline adjustability. Most singlespeed hubs have a 52mm chainline, so the 112 XTR BB would work very well to match that exactly.