Alright, I keep getting bugged to post something about the race, so here goes.

We finished. That was the main goal, so mission accomplished. Unfortunately we finished 4 minutes over the 12 hour mark, which is the official cutoff for the belt buckle. So we went home buckle-less, but feeling pretty good about finishing.

The start was fairly miserable with 38 degrees and rain for the first 15-20 miles. It kin 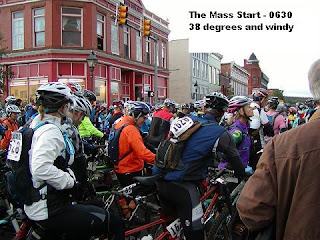 d of demorialized me a bit, but Robin just kept going, which helped get me back on track. She's waaaay tough. Descending the powerline was pretty incredible. Rain and mud made it almost impossible for me to see, and it was a solid line of people going down, so I couldn't really let the bike run. It handle so much better with some speed, so the low speed maneuvering around the washouts and ruts was tedious. But we made it down safe and sound.
After the first aid station, things picked up, I started feeling better, this section always feels pretty good since there's a lot of slightly downhill road. Cruised to the dam feeling alright, and headed up to Columbine.
This is the biggest climb on the course (but not the hardest). 10 miles, 3700 ft. We ground out the whole dirt road section pretty well. Had to use the granny a bit but overall, we stayed in 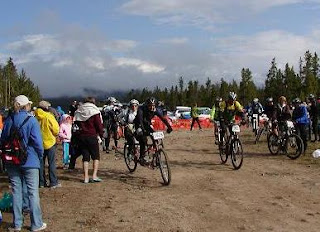 higher gears and made up some time. As usual most people we walking the 2 miles from where the road ends to the turn around point and we had to walk a lot of it. It felt pretty good though to get off and stretch the legs by walking. Just to put this in perspective, even the first year I did the race and was on 8:30 pace, everyone was walking this section.
We stopped at the top, got some food, put on more clothes and get ready for a long descent. In hindsight, we spent too long on top and should have just grabbed food quick and left. It started sleeting on us at the stop things were cooling off.
10 miles flying down the mountain wizzed by, brake pads were totally glazed over by the bottom, but they were still working (just noisy). Hit the aid station and then hit the road to powerline.
At this point I was fearing we wouldn't make the time cutoff at the last aid stop, but Robin was fearless and pressed us on. We just kept riding.

Made it to the last major aid station with plenty of time to spare and it was clear that we were actually making up time now and had a real chance to make it under 12 hours.
Unfortunately after the last aid station is when the course really hits you with both barrels. We had a short section of pavement, then right into the powerline climb. This one is truly the hardest climb on the course. Coming at mile 75 and too steep to ride in many sections. Heck, last year was even the first time Dave Weins (6 time champ) rode the thing.
So we walked for a while, rode a bit, walked a bit, rode a bit. You get the idea. Till finally we got rewarded with the killer decent down the back side towards Tourquoise lake. One thing was really consistent, we made up tons of places on every decent. go tandem.

After battling powerline for over an hour and decending down to the lake you're rewarded with a ridiculous paved climb that goes about 50' short of the gates of heaven. The only reason people don't go insane at this point is the road is paved, which feels like heaven compared to the last 80 miles...

Made it up that one too, middle ring all the way. 10 miles to go, mostly downhill and we've got almost an hour. Feeling good. We rocked down St. Kevens. Seriously, that bike rips down hills and we were passing people right and left. Made it to the "boulevard" as the call it with about 15 minutes left, but I seemed to have blocked out the fact that there's a 2 mile dirt climb to get to town and then another mile of uphill pavement after that. We were blown, but kept giving it all we had. Finally crested the paved hill and had a decent to the finish. Put it in the big ring and pedaled for all we were worth, but it was too late already. Crossed the line and saw 12:03 on the clock. damn. then somehow the official results have us at 12:04. who knows. 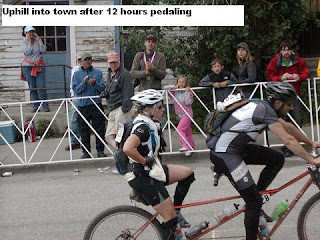 Anyways, we finished. Robin did incredible for her first bike race ever, what a way to start.

We both felt pretty gassed afterwards, but honestly, it was the best I had felt after any of the 4 times I've now done or attempted the race (and 2 of those times I only rode 75 miles!). We really trained well considering the lack of continous climbs in MN. Our biggest mistake was simply spending too long at stops and me taking too long to get my head in the game in the morning.

Overall, a great trip. Did I mention the next day we got in the car and marathoned it straight home, 16 hours. Amazingly our legs didn't even feel too bad after that.

I gotta give some major thanks to our incredible crew: my Dad, Alex, Steve and Amy. We wouldn't have had a chance without you all. Thanks!

(edit) oh yeah, apparently some pro roadie did the race too and pretty much the entire internet bandwidth for leadville is used up on pictures of him. Should anyone happen to come across any pictures of us on the tandem in the race, please let me know. I know they're out there, there were tons of folks snapping, but I haven't found any as of yet.
Posted by Bob at 6:16 PM 1 comment:

Well, I'm in CO now and have had a great week so far. Took the long way out here, through south dakota and wyoming. Saw more motorcycles than I've ever seen heading out from Sturgis along the way.
Monday we rolled into the mountains and headed to Vail. Stayed there for 2 nights to do some acclimating. We rode up vail on the tandem tuesday, which I think proved to be a harder climb than either of the major climbs at leadville. Incidentally, the marriot resort in lion's head has valet bike parking. Seriously, 24/7.

The next two days we did sections of the course. That helped refresh my memory, gave Robin the chance to see the course and gave our lungs a chance to remember how little oxygen there is around here. The trail seems to be in really good shape, so if the weather will stay dry we should have a great race sat.

Today was a full day, we headed out to leadville about 9am, did a little shopping as I wanted a new camelbak and Robin needed some socks and new gloves. The bike shop in town was closed, but the sporting goods store across the street was open. Much to my surprise, they had exactly what we needed at great prices. Honestly, I think they had a much better selection of usable accerories than the bike shop...
Next we drove down to the start of the columbine mine climb, but not after getting lost trying to find the dirt roads that aren't on maps which take you there. Finally find the start, get the bike set to go, and head up. Up the 3000' elevation, 8 mile long climb. About halfway up I notice that my face is really getting soaked with sweat, moreso than usual. I reach up to adjust my helmet only to discover I forgot my helmet! It's pretty much just a dirt road, so we proceed up. We climbed all the way up the road in the middle chainring, which is what I hope we can do sat. there's a few sections in the last 2 miles that require walking, but during the race that whole part seems to turn into a line of walkers.
Get to the top and turn around to start the descent, sans helmet. Needless to say I had to take it a little easy going down the rocky sections, but we made it safe and sound.
Drive out a couple miles of dirt roads to get back on pavement and head back to town. Just about as soon as we hit pavement the car starts making a crazy loud sound. First thought is flat tire, so I pull over. But I noticed the sound stopped when I shut off the car, not when I stopped moving, maybe a thrown belt? nope. Downpipe on the exhaust broke loose from the flange, so the engine exhaust was going right into the engine compartment instead of through the muffler, truly deafening.
We pull into leadville and find a repair shop that looks pretty much just like a junk yard. I talk to the guy and he's willing to take a look. I figure it's best to do that today since he'll probably have to order VW parts from denver. Leave the car with him, go eat lunch and walk around leadville. Come back an hour and a half later expecting some bad news and the guys says "it's done". He welded up the flange, sounds great. $80 and we're on our way, I couldn't believe it.
From there we high-tailed it to breckenridge for massages. Not just massages, but the best damn massages either of us have ever had, wish we could take these guys back to MN.

finally, back to copper mtn for dinner and sleep.

Heading to Leadville, so the shop's closed till the 16th. I probably won't be checking emails much during this time, so don't be put off if you don't get a response back right away.

I think I've got the bike all dialed in for the race. The last 2 weeks has been almost constant tweaks to get things ready. I wish I thought my butt was ready for 12 hours straight on tandem, but it'll have to deal. New chain, cassette, rings, rebuilt the fork with heavier oil, got all the creaks worked out. I switched the rings out to 22-30-44, so with the 11-34 cassette, that'll give us a huge range. The gears sound really low, but I'm running 29 x 2.5" tires which give huge wheel diameters, and I remember how much walking was involved in my last tandem attempt and I hope the really low gears will help.

Maybe I'll start to have more time to post here once we can slow down on the training. I forgot how much time this race consumes.