My last posting was on Feb 1, I thought it fitting to write one on the last day of the month as well since I didn't get any in between! I'm going to warn you right now this may be long, not have any pictures, maybe be depressing, and most of all be erratic. I suspect most folks that read this regularly know what's going on but I feel like I need to say something.

I was traveling for work the first week of Feb, down in Little Rock as usual. Got back to town late Wednesday night and Beth left town for a girl's vacation the next day. Thursday night I got an unusual call from her from Colorado (where she was on vacation). She said my cousin had called her cell to ask if she knew that my Mom was in the hospital. Seemed like an odd call, but she had gotten a call from our Grandfather telling her my Mom was in a hospital. So via this message that started in MN, went to WI, MN, CO and finally back to me I found out that sure enough my Mom was up at Mercy Hospital for somewhat unknown reasons.
Turns out my parents thought I was still in Little Rock, hence they hadn't called. Besides at that point she was just having a really bad headache and they were simply trying to find out why.

A day later (Friday) they determined that she had several brain tumors that were putting pressure on her brain causing the headaches. They didn't know much more than that without a biopsy, but no matter what the tumors were composed of, they had to be removed to relieve the pressure on her brain, so they scheduled her for surgery Monday morning. Yikes, thinking about someone opening up your brain and removing part of it isn't the best thing to have on your mind for a whole weekend while you sit in a hospital bed. It was a rough weekend for my Mom and for all of us trying to make her comfortable with this notion that someone was going inside her head.

Monday came and they got her prepped and rolled her in early for surgery. We spent what seemed like an eternity in the waiting room (it's about a 4 hour surgery). They finally released her into recovery late in the afternoon and into the ICU about dinnertime. The surgeon came and spoke to us afterwards and told us they removed three tumor masses, and that the tissue he removed did look cancerous, but pathology would need to confirm that. However you have to know if the surgeon it bothering to tell us now that he "thinks" it is cancerous, it probably is.

Days went by in the ICU and she slowly recovered from the trauma of surgery. The actual incision site healed up really well, but through the process she has lost much of the function of the left side of her body. She was pretty heavily medicated for pain this whole time, so it was difficult to see how her brain was functioning, but when the meds would wear down, she seemed to be pretty alert and sharp so it seemed like things would be ok.

The pathology came back later that week and confirmed what we feared, Glioblastoma-multiforme, which is a level 4 cancer (or at least if commonly referred to as cancer, but by definition isn't cancer because it does not spread outside of the brain).

The hospital had recommended transferring her to Abbott Northwestern for physical therapy after surgery to re-learn how to use some of that left side which wasn't working. Abbott all has one of the only brain tumor centers in the cities, so this seemed like a good match. I spoke with the neuro-oncology department there and really felt it was the right place to get treatment.

Sometime about a week and a half ago, she moved to Abbott and started physical therapy and meetings with the neuro-oncologist. So far she's doing really well when they can get her to stay awake (they had her on a bit too much narcotic and it was sedating her heavily all day). She walked with a cane this week and seems to be on her way to at least being somewhat independently mobile. Her left hand hasn't regained much fine motor control, she can move it but not do anything precise with it. That really drives her nuts since she's left-handed. I don't think she'll ever be able to write with that hand again but she can hold some things with it while she uses her right.

So between many, many trips to various hospitals, trying to get my parent's house ready for her to come home (she needs hand-rails in a lot of places), I've been pretty tied up. So if you've called or emailed there's a reason why I'm pretty slow responding right now. Please be patient.

The outpouring of support from family and friends has been overwhelming. The hardest part is keeping people from visiting as she needs to sleep as much as possible and lots of visitors really tire her out. It's great to know that there are so many people out there thinking and prayin' for her. I don't think I can write much more about this right now as it's still kind of draining and hard to think about. I know many people have been down this road before and I'm sure some of you reading this have been through cancer yourselves. My heart goes out to you, it's so sudden and so life-altering. Makes you really take a look at how you live life. 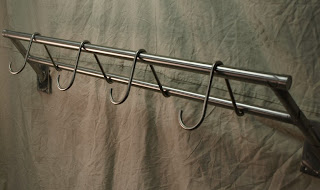 Been a while since I talked at you. In that time I managed to finish up the fancy-pants fully luggest stainless steel bike racks. They're really neat, but I'll be glad to see them go, they've been a much bigger pile of work than I anticipated. 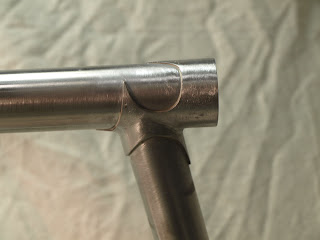 Doesn't really seem like there's much there, but all the lugs had to be custom carved, shaped and added onto to get the look the architec was after. And since these are all stainless that meant all the lug additions had to be tig welded on instead of my usual method of brazing them on. And well, I'm not a very proficient tig welder, so it took me a while to get things looking good.

The lugs started off as 4 sets of Llewelyn mini-six lugs. The upper head lugs had additional side points added and a front center point added then were filed down to shape. 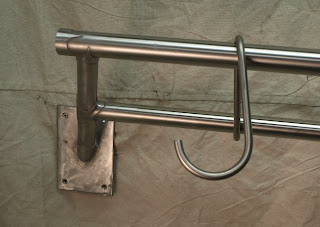 The lugs for the second cross tube were seatlugs with the binder bolts cut off, the slots filled in and then the whole things filed down.

I had to make up the hooks too. They're bent from 3/8" 316 stainless round bar. Pretty beey, but I thought it looked more appropriate. They simply hang from the bars, so they're fully adjustable or position.

That thing has really consumed a lot more time 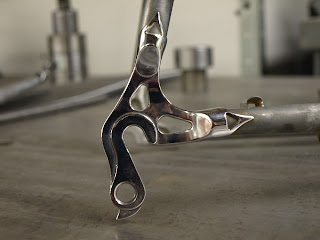 that I thought it would, so I'm, stuck playing a bit of catch up in the shop, but I'm doing that well. Kept going on the stainless bend and finished up a dropout replacement and some stainless braze-on's on a BBC frame in for a repaint. Still have to give everything the final polish, but it's close to being ready for new paint.

Finally got in my latest order of 953 tubing, so as soon as I wrap up the three forks and one other frame I have in process, I'll be back to working on stainless. Reynolds has been a bit hit and miss on delivery of stainless yet, but I've learned to just keep ordering tubing about 6 months ahead of time. That strategy seems to be working well.

In other news since the last time I wrote, I froze my a$$ off a few weekends ago riding to the Cash tribute show at the Cabooze. The good news is the show was more than worth the 2am ride home at -20 degrees. 5 bands covering nothin' but cash all night. spectacular, especially with Thorny and Stone for entertainment.

That's about all for now.