Another year that is. Yup, as of yesterday another year down.
For a couple years now I've been meeting a few friends for breakfast at Al's roughly once a month before work. We're all early birds, so we meet right when it opens at 6am and I'm usually back to work shortly after 7. Most of the guys ride there since they live and work in Mpls, but it's one hell of a hike for me since I live and work in St. Paul. But I've always wanted to ride it, and I decided what better day to try than on my birthday. So yesterday I managed to get myself up at 4:30 am so that I could get there on time. Rolled out of the house a little before 5 and proceeded to have one of the most peaceful rides across the cities that I've ever had. it was fantastic how few people and cars are out at 5am. Made it in about 5:50 to Al's and waited for the others while mentally scoping my route back to work.
A huge plate of pancakes down and I was back on my way with a full belly this time. I stayed north of 94 on the route back to work just to keep the mileage down. Took the U of M transitway to Energy Park, crossed the ped bridge there and followed Pierce Butler up to Como. Jumped on the new bike lane to the capitol and weaved my way down to Phalen Blvd and the new bike lane there which took me right to work.
Felt pretty good all day till about 3 pm when my lack of sleep started really sinking in...
One thing I've really noticed the last few weeks is how St. Paul is really ramping up the bike lanes on city streets. I guess that huge federal grant is really starting to kick in and (like the folks at McDonalds) I'm lovin' it! In the last week I've ridden at least 10-15 miles of bike lane ot designated bike path that's brand spankin' new within the St. paul city limits. They're finally adding bike lanes that go north and south which is a nice change, and they're adding a lot of lanes north of 94 which has been somewhat of no-man's land when it came to cycling before this.
Anyone know if there's a map on-line anywhere with all the new changes or planned changes shown? I haven't found one, but it seems like there must be one out there. I'd love to know if there's more I'm missing.
In other news, my shop cleaning sell-off has been wildly successful, and in the spirit of keeping it going.... 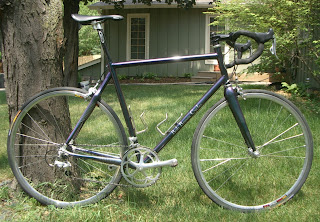 I have this full bike or frameset for sale. Long time Blog readers will know all about this baby, but for those that don't:
This is a lugged steel front/carbon rear end superlight racing frame. 58cm effective Top-tube, 60cm effective Seat-tube with a 1cm headtube extension. 77mm drop, 41cm chainstays, 73 degree parallel angles. This is a full on racing bike.
The frame is a combination of True Temper S3 and Columbus Spirit tubing silver brazed with highly modified Slant Six lugs. The rear triangle 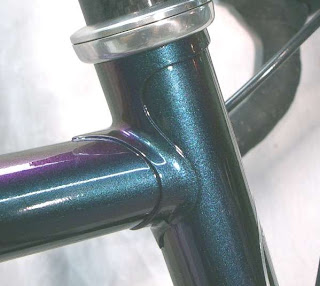 is a Columbus Super Muscle kit, including full carbon chainstays and seatstays.This is the top-of-the-line offering in carbon rear triangles.
The headlugs have been carved back quite a bit to give that "bikini lug" look and to save weight.
The seatlug and BB shell were custom creations with integrated sockets to accept the carbon rear triangle tubes. The seatlug is a carved up slant six lug with a monostay socket added to the backside to accept the carbon mono-seat stay.
Then to top off a very unique build, I gave it an even more unique paint job. The frame is sprayed with Dupont Chrome-illusions color changing paint. The paint is opaque on most of the frame, but on the rear end, I increased the translucency on

the carbon center sections, so that you can clearly see the carbon weave through the color effect. The same was done on the carbon fork. The paint changes color depending on lighting and viewing angle, the dominant colors are a deep purple and forest green that you see in most of these pictures, but in sunlight it also shows a dark red and gold. The curvy surfaces of the lugs show the most change since you're viewing multiple angles at one time when looking at them.
The downtube logo is painted in, no decals there, so it's perfectly smooth, buried under several coats of clear. The headtube has a sterling silver foil logo on it, also buried under the clear to protect it. It looks stunning with the dark background. 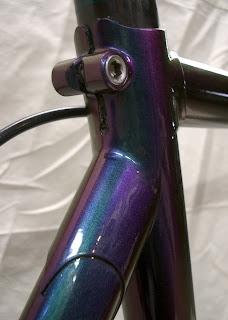 The fork is an Alpha Q Sub 3 fork, painted to match the frame. The overall condition of the frame and fork is near perfect. The only mark on it is one small paint chip on the underside of the left chainstay near the dropout. This happened in transit to a show and it 100% hidden in normal use (you can only see it if you flip the bike over). It's on the carbon chainstay, so there will be no corrosion issue from the chip. Otherwise the frame and fork look brand new. This was a show bike I built up and did ride occasionally. It's very light and rides very smooth. The carbon rear end definitely does remove some of the jarring of road irregularities and smooths out the ride.
Currently the bike is 100% built up and ready to ride. It has a used Campy Record 9 speed (alloy) group on it with newer Record (2002 model) hubs laced to Sun Venus deep V polished rims and DT revolution spokes. The wheels are very light and accelerate well. The seatpost is the custom Wound-up carbon post to fit the 31.6 Spirit seatube. Stem is a Thompson X2, 100mm, bars are TTT 4G XL, 31.8 clamp, 42cm. The saddle is a brand new Flite Carbonino (very light). Cranks show the usual scuff marks from shoes on the arms, the shifters are the last year of the alloy lever style and are in good shape, but there are a few dots of color stain on the lever blade (no scrapes or scratches though). Cassette is a Record 9, 12-23 cassette, used but has lots of life left in it, the chainrings are 39, 53 and in good shape.
If anyone has questions on component condition, I'm happy to take detailed pics of anything.
And if anyone local to me is seriously interested, you're welcome to take it for a ride. This is really a spectacular bike and is one of a kind. I've never seen anything even close to similar and will make a great racing frame for someone. Please email me with any questions.
I'd like $1800 for the frame and fork, or $2900 for the complete bike. I think that is really priced to move considering if you put a deposit down today to have me build this bike I would charge you about $3200 for the frame and fork alone and you'd have to wait 14 months to get it!
If this is your size, this is a great way to avoid the long wait for one of my frames.

ok, now that I got that out of my system, here's some frame building stuff. 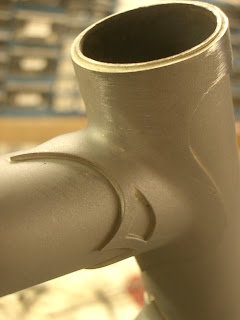 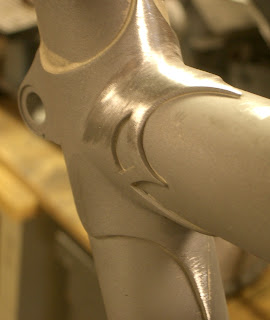 I've been working on a new frame with Richard Sach's newest lugs. I really like the overall look of them once I cleaned 'em up and reshaped some of the shoreline. The side cut-outs are a really nice shape for the size of the lug. My only gripe is that these are not cast as well as his other lugs. They're coming from a different casting house overseas and you can tell they're not Long-Shen castings. Not a big deal, but the need more cleaning up before they're ready for brazing. The front triangle is about done on this frame and I've begun the rear. I expect it won't be long before it's ready for paint, which I'm sure the new owner will be excited to hear! 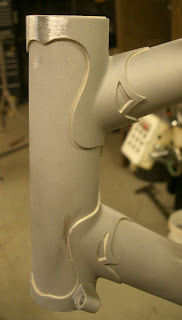 The Midway TMO has the current draft proposals online at the top of their main website here:
http://midwaytmo.org/

The map has the current bike paths and lanes as well as some proposed new routes. The narrative does a better job of explaining specific plans. Missing on this map is the Ayd Mill Road path, which i THINK is a done deal and just not begun. It's in the narrative, but with a 10-year timeline, and it was originally supposed to begin construction this summer.