I was hoping to do a second 953 update here, but I haven't gotten around to collecting all my photos again. So no pictures yet, but I did however get my next shipment of 953 which is from yet another manufacturing lot. That makes three manufacturing runs that I've received tubes from now and disappointingly this lot was virtually identical to the previous two. Most of the main tubes are over the spec for wall thickness and therefore weight. I did get one 31.7 tube that was nearly right on the spec though. Here's the average weights look now after measuring multiple samples of each:

I don't think this is necessarily a bad thing as I like tubes with these butt thicknesses, but I think it would be of great benefit to builders if a $600 tubeset actually met the spec. I'll continue to use it, but I just won't expect it to be as light as claimed. That actually makes it a much more versatile tubeset. I'll be curious to see how the Columbus XLR compares. 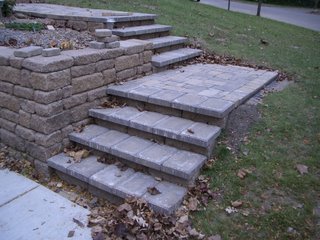 This weekend I decided to take advantage of the nice weather and try to finish up building the front sidewalk. I took Friday off to get a head start putting down the sand and leveling it for the pavers. I ended up hauling about a yard of sand in to get everything to final grade. Next I put down the first set of caps on the steps as those would determine the starting edge for the pavers. Then finally I started laying in pavers to form the walk. Here's how things looked at the bottom set of stairs (which is where I started). 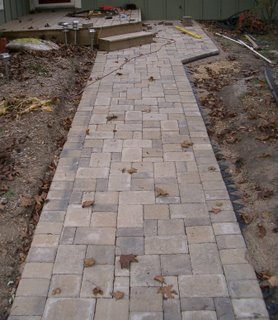 I took a little break from the pavers Saturday morning to go over to my folks place and help them re-roof their shed. That went quick smoothly and we had it all wrapped up before noon. Then I headed back home to hit more pavers. Things went faster than expected and we managed to finish up most of the sidewalk. We really like how the cobbles go with the aged feel of the retaining wall and the stone on the house.

We just have to put the locking sand down between the cobbles and run the compactor over the whole thing and it'll be done.

Sunday... The Lake Rebecca 'cross race was Sunday and I was excited to start my 'cross season. I had missed the first two races due to being out of town, so this was going to be my first. I've always liked this course, it's a shorter loop, but with a nice run-up in the woods and a second grassy run-up that I tend to do well on. Both run-ups are long enough that those with gears usually remount and ride them, but I find it's faster for me to run them since I've only got one gear and it's big!
I registered for the B race since I haven't been training much, it seemed appropriate. It was raining at the start which also seemed appropriate, but made for a greasy course. We had gone about halfway around the first lap when things went awry. I was fairly close to the front and feeling good with my position when someone went down immediately in front of me. It was really, really early in the race so the pack was still very tight and I had no room nor time to find a line around him, so I ended up riding right into him. I pulled up as hard as I could, but my front tire got caught up in his bike and threw me right over the bars. While landing I felt a distinct pop in my shoulder and figured I was out of the race.
I got up really fast and felt ok, aside from a little soreness in the shoulder and some blood running down my leg, but I noticed the other guy wasn't up yet (probably partially due to me landing on him and his bike). I helped get his bike off him and asked him if he was ok, to which he replied yes, but he was still doubled over in pain so I hung around. Once he was upright enough to walk back I picked up my bike and began to finish out the lap.
Backing up a minute or so, after I immediately got up, I moved my bike out of the main line in the trail. Despite that someone else got tangled up in it. They didn't crash, but nearly tore my front wheel off by yanking on their bike while their pedal was in my spokes. Nice. Then I finally yelled at him to stop because his pedal was stuck in my wheel, I removed his pedal from the spokes and he yanked the bike hard, scraping his pedal all the way down my fork, tearing off about 6" of paint with it. Bonehead. That part pissed me off.

Anyways.... I finished out the lap, and pulled in at the start line to tell them everyone was alright and to get some tools as my stem was turned and my brakes we messed up. I spent a couple minutes fixing the bike and decided I didn't feel too bad, so I went back out and raced. Of course this all happened on the first lap, so when I headed back out I was really far off the back, but who cares. I just rode hard picked up places where I could and finished out the race near the back. I still felt good for finishing.

Later that night though I really started feeling some pain in the shoulder. I iced it and took some advil and tried to sleep that night. Still hurt a lot in the morning so I went to the doc. He said it was probably pulled out of joint partially during the crash and is just really inflamed, so I'm on big anti-inflammatories for the next few weeks. As long as I didn't tear any of the rotator cuff he says I should be back to racing in a week or two. Here's hoping.
unfortunately the guy I ran into didn't fare as well. He walked out and looked fine at the finish, but it turns out he broke a rib and I'm sure is far more sore than me.

So I'm laying low this week, taking it a bit easier trying to heal up so I can still get in a couple more races before the season ends in November.

See man, you ride with Us and you live to ride another day man. ;-)

Glad you're ok... concerning the guy who was yanking on shit, next time just drop-kick the dude in the snizzles and I bet he'll chill out.

I recommend excessive visits to Al's for your recuperation.

Gotta keep your strength up!