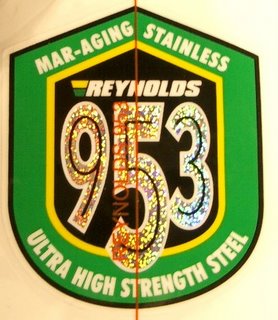 I finally got around to downloading my first round of pictures of this 953 build. Since there doesn't seem to be much information out there yet about 953 or working with it, I'll try to be as descriptive as possible on my experience. But first, a warning.... new builders are always eager to try new materials. This stuff isn't easy to use and it's really thin, I really don't recommend using it unless you've got a good number of frames under your belt and you've brazed a lot of stainless.

But hey, look at the sparkly tubing decal!

Ok, down to business.
Here is the complete tubeset that I'm using for this frame.

Ignore the appearance of the curve in the tubes, that's simply my bad photography skills shining through. The tubing is very straight actually which is even more impressive since this is the Aged (heat-treated) tubeset. Reynolds offers several options in the tubing in 28.6, 31.8, and 35mm tubes. Put simply, they have 2 wall thickness profiles and 2 butt length options to chose from in each diameter. Most of the tubes are on the long side, so for smaller frames, you almost have to use the long-butt tubes and cut off a good chunk of length. For this frame I chose the thin-wall, long butt tubes in 31.8mm top and seat tubes and 35mm downtube (to fit the slant six lugset). The raw tubing has a very good surface finish and as I said is very straight, however it's not very round, especially in the thin portions of the butts. Both the top and seat-tube were about .025-.035" out of round in the center section. The wall thickness is consistent (I measured both ID and OD and had identical out of round values) so it shouldn't affect the strength of the frame, but it's a little annoying to deal with. The downtube was closer, it was only .010" out. I suspect this may be due to the aged tubeset, that the distortion occurs during the heat treatment which is good for me, I'd rather deal with this disortion now before the frame is built than afterwards which could happend with tig-welded frames. Also the wall thickness was slightly thicker than claimed, but that can be a function of die wear at the manufacturing facility. 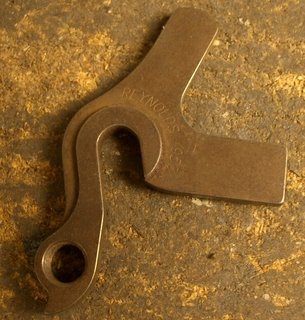 I ordered the whole Reynolds Happy-meal package with this one, so that includes a set of 953 dropouts and a really well made stainless brake bridge. The dropouts are nice, basically the same shape as the Paragon dropouts, but made from 953 material then heat-treated. I'm using these because the 953 chainstays have a larger diameter at the dropout end than a traditional chainstay. They won't fit Henry James plug style stainless dropouts without addin a machined sleeve over the plug and I don't know fo any socket style dropouts that will fit. I prefer plate dropouts like this anyways, but these are really expensive (3x more than Hank!). Reynolds also lists the same dropout but in 901 stainless for a fraction of the cost, but they were out of stock. I've already seen quite a few new flat plate stainless dropouts coming to market presumably to fill this niche. 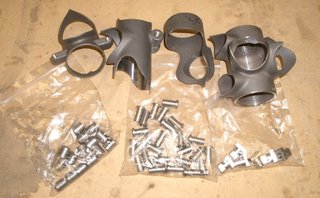 Lugs were the next challenge. This frame is going to be 100% stainless so it won't need paint. There are actually lots of stainless lug option out there these days, which is good. However with the very thin-walled tubing I don't feel using traditional oversize diameter tubes would provide a very stiff frame, so I wanted bigger. That left me with Kirk's slant six lugs which are absolutely perfect for this application. The drawback is that there was not stainless BB shell to match. I searched high and low, but nothing came up. In the end I had a small batch of them custom cast at Long-Shen, so I suspect I've got the only shells to make this work with the Slant Six lugs. All the frame fittings and braze-ons have to be stainless as well. 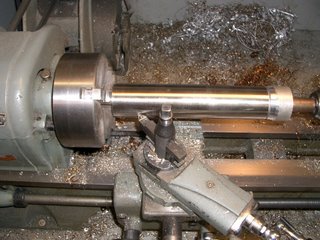 The keen observer will notice in the tubeset picture above that there was no headtube. Reynolds does not offer one, if you want a stainless headtube you have to make it yourself. Again, I searched for 36mm OD headtube stock, but didn't find anything easily available, so I turned my own. I had to start with 1.5" x 11g 316 tubing, then turned the OD down to 36mm and then bored the tube to 33.2mm ID. 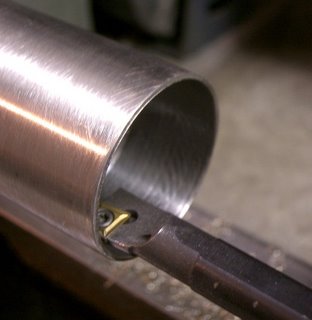 Then while I had the tube on the lathe, I bored the ends down to 33.6mm so that after brazing the leadlugs, reaming the headtube would be easier (less material to remove). The stainless is harder to cut in general, so I want every advantage I can get for the final facing and reaming operation.

This was a lot of work to go through just to get a headtube, I'd vertainly prefer to find a source for 36mm OD stainless tubing in the future, but for this one I got an exceptionally round and well toleranced headtube since it was fully machined!

Mitering the tubing was not as bad as I was expecting. The aged tubeset is very hard stuff and Reynolds has warnings all over their website about how difficult it can be to work with. After doing some work with it, I can say it is tough, but not uncutable (like 853 after 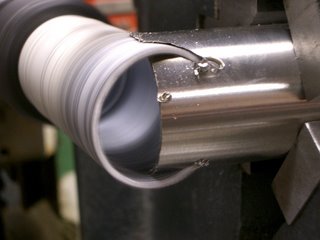 welding/brazing).
You really need a solid, heavy, rigid cutting set-up though don't try this on your joint-jigger running on a drillpress. In this picture is appears that the cutter is turning fast, but it's not, about 100 rpm actually and I'm feeding the tube exceptionally slowly (about 3x slower than I would with 4130). But as you can see, the hole-saw does cut it just fine as long as you use the right arrangment. 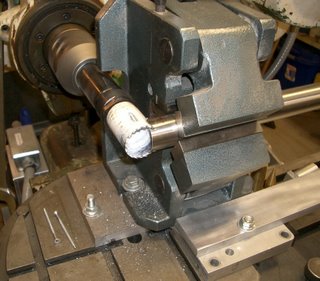 To give you an idea of how rigid things need to be, here's a picture of my tube-holding arrangement and the cutter arrangment. That's a 6" wide tube vise that weighs about 75 lbs mounted on a 15" rotary table on my horizontal mill. The cutter is held in a 1.5" diameter collet which is directly attached to the 40 taper drive of the machine. This thing has a lot of mass behind it (2200 lbs) and have no chatter whatsoever. I think this is about the minimum I would want to use to cut this stuff and not risk tearing or chipping the tubing. 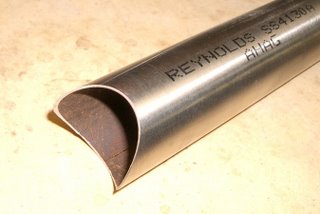 Here's a sample cut, this happens to be the bottom of the seat-tube. You can see the cut is very clean, it just took a little longer to make it.

One other nice note, Reynolds was kind enough to mark each main tube with the tube part # right on it as they do with all their steel tubing. Really makes it nice to know which tube is which without measuring all the butts. I wish other manufactures would follow suit.

That's about all I have time for right now. I'll post more pictures when I have time. The front triangle is all mitered up and ready to go, I just need to get all those pictures together.

Marko, it's gonna be bitchin. I have another tubeset on the way and plenty o stainless lugs for when the BKB needs one!

Great info, Bob! I've just ordered a couple of sets of the non-aged tubing to build some mountain bikes with, we'll see how it compares to your experience.

Very cool! I can't wait to see this one. Can you post a pic when you get done? And how about making the next one with a 35mm seat tube, top tube, and down tube. I just wanna see what that would look like. Anyway, can't wait for the finish!

Nice work Bob. The machining forces are a problem with such thin tube and your techniques are good in terms of work holding. it would be nice to have acsess to a cnc laser cutting facility with rotational cnc chuck c-axis. this would be far less stressful to the tube and there would be no gripping marks. Expensive gear though but not if a batch a of frames for production where in mind.I like this material it lends itself to production runs.Robotic cells are a real possibility for frame production with controlled conditions.

The bend in the frames in your photo is not bad photography skills, its lens 'barrel distortion'!