I know it's been a while since I updated. I've just been cranking on the house and shop projects lately, so I haven't been taking the time to write much. I even took a bunch of pictures of house progress, but of course haven't bothered to download them off the camera, so you'll have to wait will next time for photos of finished work. 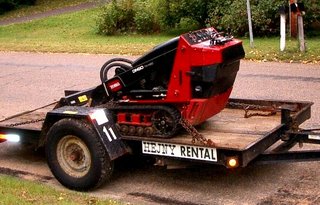 Since last we spoke, I started tackling the soon-to-be sidewalk in front of the yard. That meant a lot of digging. I had to remove all the dirt where the sidewalk would go and replace it with a 6" base of packed class 5 material. I also needed to dig out the extremely hard-packed earth at the end of our driveway inorder to prep that area for concrete to form our new driveway apron. So I splurged and rented a Dingo. This thing was great. It's basically a walk-behind bobcat with a smaller bucket, which makes it much more maneuverable and less damaging to lawns.
So I spent a full day running this thing and filling up trailerloads of earth, then hauling them to the back yard and unloading. I think I did about a dozen trailerloads in the end between the sidewalk and the driveway. We were able to really 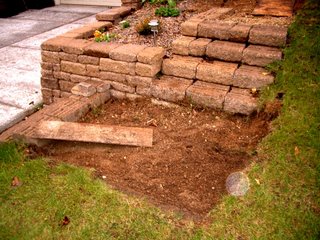 regrade the north side of the house well with all that dirt, should be much better for drainage.

Here's how the sidewalk area's looked after gettin' the dingo treatment. I took out about 6" of dirt, then the following weekend went back and filled it back in with class 5 filler and compacted it. So if I had a picture of how this looked now, it would be flat and hard and ready for some pavers! 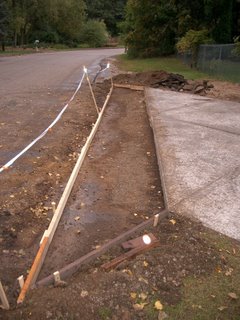 Here is the driveway apron all formed up. This was the real reason for getting the Dingo. We had been driving over the dirt that was here for a year now, you can imagine how hard it was. I attempted to dig it out by hand twice. Both times I was out there with a pick-axe for several hours and made a total dent of about 3 cubic feet! The Dingo was well worth the cost just for this. After this picture was taken, I added the re-mesh and some expansion joints, then it proceeded to rain for about a week straight. Once the rain finally subsided, I dug out all the silt that had washed in and we poured it yesterday (pictures to come).

On the shop front, I've been busy too. I got a new toy, a pantograph engraver, which I have yet to even play with. Sometime soon I hope to be able to start learning how to use it, but I should be able to engrave frame parts now, fork crowns, BB shells, dropouts, etc... I'm pretty excited about that.

Cranked out a couple of S & S retrofits and misc projects, but my big exciting news is that I'm finally working on my first Reynolds 953 frame. I'd been waiting for months for this tubeset to arrive and the first one is here, with a second on the way. For those who are not familiar, 953 is Reynolds new super-high strength stainless steel. Currently it's only available in very thin dimensions geared towards racing frames. Columbus also just announced this week that it will be debuting a similar stainless tubeset at Interbike this year, undoubtedly to compete with 953.

Seeing that this is stainless, that opens up some options. The frame I'm working on will be completely stainless steel, all lugs, fittings, tubes! That means it won't require paint. The material is really designed to be competing with Titanium on all accounts (strength, weight, finish, etc).

I had some concerns about the material prior to ordering it. It's incredibly strong, which generally means very hard to cut or work with. They sell it in two forms, a standard version which is designed for tig welded frames and requires a post-weld heat treatment, and an Aged version which is already heat-treated to bring it to full strength (250,000-300,000 psi!!!). The aged version is designed for lugged construction since silver brazing will not heat the material up enough to damage the heat-treatment (which welding would destroy). But it's also fully hardened, so I expected to only be able to miter it by abrasive means. However upon working with it a bit now I've discovered I can miter it on my horizontal mill with a holesaw just like I do with any other tubing. The key is that I have an exceptionally rigid mitering arrangement and I have to feed the tubing much slower than regular 4130. It's definitely hard stuff, but not as bad as Aeremet was.

I have been taking pictures of my progress along the way on this frame, just haven't uploaded there here yet, but I will so watch for lots to come. There aren't a whole lot of 953 frames out there yet and even fewer lugged ones so stay tuned.

Who cares about houses and bikes, where is the 2nd Helping recap?!?!?

I'm not sure if it's a good idea to recap the 2nd Helping in order to protect the guilty. I say if you want to know what went down, you shouldda been there!

DINGO!!!! Your morcifying your yard? Say it ain't so, BBBB.

Yup, morcified my yard. I took out a bunch of perfectly good dirt and put concrete and pavers in place of it to make a nice smooth surface that's absolutely no fun to ride a bike on. Works good for my car though...