Yup, it's September and it was cold and damp this weekend. That can only mean cyclocross!!!

In preparation for the greatest sport ever, I've put phase 2 of my rigid 29'er plan into effect 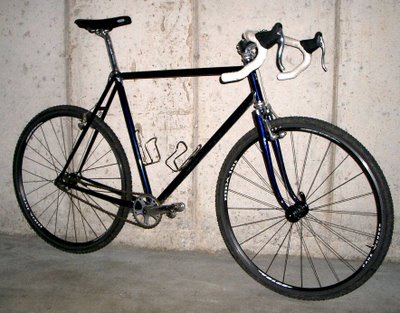 A little shorter stem, drop bars and some skinnier tires and presto: Cross bike! This was part of my original design actually. When I was designing the geometry for this mountain bike I realized that it was nearly exactly the same as my 'cross bike, just with more tire clearance. 72 degree head angle, 75mm drop. Really the only thing I'd do differently for a dedicated 'cross bike would be a slightly shorter top-tube (but the 90mm stem makes this one acceptable) and a little shorter chainstay. Think of it as a 'cross bike with lots of mud room.

I threw the Cane Creek wheels on there, but I'm actually thinking about running the Stans rims and these tires without tubes. I just didn't feel like changing out the Crows that are currently on the Stan's rims. The King/Stans wheelset weighs pretty much exactly the same as these Cane-Creek wheels, but they are wider and might give me a little more meat on the ground for traction. Either way, I'll be going tubeless with the Stan's sealant for 'cross this year. I'll give a full report after a few races.

I did a short shake-down ride in Battle Creek on it last week, fine tuned the saddle height and angle to fit the drop bar position better. Then took it out Saturday for a real ride with Tommy Mac. We started at his place in Mlps, then headed down to Lebanon hills, did 2 laps there then high-tailed it back to his place. Turned out to be 4 hours, which was about 3 more than I'm in shape for. But the bike was good. I stuck with the 34:14 gear which feels pretty good all around. It's a little bigger gear than my usual 42:18 'cross gearing, but this bike is light and quick and it feels ok, think I'll stick with it.

In other news, I spent Saturday afternoon and all day Sunday finishing up the shed. It's done though with the exception of paint (which is about 1/2 done thanks to Beth). The trim took me a little longer than I expected, but it came out good and matches the house perfectly (it's really important that your shed matches your house exactly!). Sunday it drizzled all day, kind of right between drizzle and actual rain, which combined with 50 degree temps made for a mildly miserable day to work outside, but I really wanted to finish it up so I persevered.

Finally some good news (at least for my pocketbook): the Jetta is back and shifting great. After a week of bleeding the new slave cylinder every night, I finally gave in. I figured there was something else wrong that I wouldn't be able to diagnose, so I took it to a transmission/clutch shop. Had to drive it there in 2nd gear since I couldn't shift it at all while the motor is running. Once I finally got there, I told them my whole story, what had been leaking, what I'd replaced and what it was doing now. They were a little baffled, but thought I was on the right track. They said they'd start by just re-bleeding the system. When they called me back about 5 hours later, the guy said "we bled it, bled it, and bled it, then left it sit an hour and bled it and bled it and bled it again." Finally after several tried they got all the air out and it was shifting as smooth as silk. The only charge was for an hour's labor which was much better than the thousand dollar charge for dropping the transaxle to replace the clutch that I was envisioning. He hoped this was all it needed, and so far it seems to be working. I'll keep my fingers crossed.