To finish the story on the tandem repaint from my last post:
I have to say Hat's off to the Big S company in that they stand behind their product. The owner of the tandem called them up and sent some digital pictures I had take of the defect and they told him to send it in, sounded like a warranty repair. So he'll get that fixed and end up with a new paint job at no cost. Good deal all around, customer gets his bike fixed and repainted for free, and I don't have to hassle with the thing anymore.

JimG posted a comment on the last entry as well asking for a picture of the distorted chainstay from the other paint job I spoke of. Here you go: 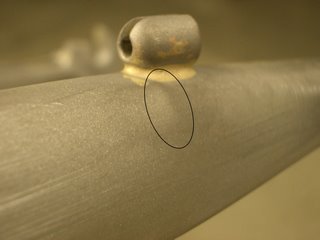 It's somewhat difficult to see in a photo, but there is a fairly sharp ridge formed where I've circled and there's a matching one on the other side of the stay. These happen to be very thin chainstays (This wouldn't have happened on a thicker stay) and the stop was brazed with brass. I have no idea why anyone would install a cable stop on a tube this thin with brass, that's just a crummy idea to begin with and as you can see it's not the neatest brazing. There were a few other spots on the bike with some copper flash around brass brazing, which is an obvious indicator of far too much heat. Fortunately for the customer this appeared to be the only place with real damage though, so a new chainstay is going in.

Had a great ride Monday night. I headed out about 4:30 and rode towards Mlps. About halfway in I thought I'd see if Otree wanted to meet up for some riding on his way home from work. Good timing as he was just getting ready to head out, so I headed south and met him near the 494 bridge by the airport. From there we did some hills in St. Paul, up Ohio St., up the highbridge, then he showed me his scheme of connecting up the Grand Ave hill, Ramsey hill and Alley D'uez. By the time we got up all those I was really starting to feel it, so I peeled off and headed home and he did the same. All in all about 2 hours of mostly hills on a beautiful day.

Yesterday I was still feeling the hills in my legs, so I worked on bikes instead. I'm trying to finish up a frame right now and I got pretty close last night. Finished up the seatstays, installed all the bosses and did a little finish work on the lugs. Set it off to soak overnight and I'll try to wrap it up tonight. I still have to finish up the fork, but I think I may get that done this week too. It feels good to start catching up on some of this work around the shop, I just wasn't really able to spend any quality time in there in April.