It's been a pretty good week, I actually rode my bike more days than I didn't ride and given my schedule as of late, that's a big accomplishment.
Monday night I did my errand running via bike, I have three forks to ship out and a couple other packages. Somehow I managed to get all three fork boxes halfway in my Bailey bag which was enough to do the job. Rode 'em down to the fed ex depot and dropped everything off. It happened to be a pretty warm and humid evening and it looked like the rain was going to hold off for a while so I extended my ride. Went into South St. Paul a little bit, hitting the Ohio St. climb on my fixie and then riding up through the big park in Cherokee Heights. Exactly as I was turning around to head home I feel a few sprinkles of rain. No problem, it was really hot and humid and the drops were actually feeling pretty good, that is until I got down to Shepard road by which time is was pretty much raining full-on. I had a rain coat with me, but I was already soaked and it seemed like it would just make things less comfortable. Made it soak, completely soaked through, but it was still warm and I felt pretty good.

I did a couple of off-road rides in Battle Creek this week too. First one I rode my usual racing bike set-up with the Crow's for tires. It felt good and light after riding a heavier bike with heavier wheels out west the previous week. The crows really are silly light and I think you really get used to how they handle (which is a little on the sketchy side) and learn to deal with it.

I bought a set of Kenda Small Block 8 29'er tires before heading to Fruita, figuring I'd want a 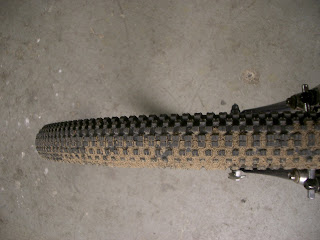 spare set of tires out there. Well, I didn't end up needing them out west, so I figured I'd give them a go at Battle Creek. They're a pretty light all around 29'er tire, the two I have weight in at about 625g each (Kenda claims 575). In contrast, my Crow's come in around 530g.
I put the SMB 8's on my King/bontrager wheelset which are slightly heavier than my full Stan's tubless wheelset, but I didn't want to hassle with the stan's tubless goo which would have been required to use the lighter wheels with these tires.

First off I noticed the heavier weight right away. The SMB 8's definetly don't accelerate as fast as the crowns, but nothing really does. They felt about the same as my Little Alberts for acceleration. Once I got in the woods though it was hard to deny that they roll really well and feel nice. The rounded shape made cornering great and I felt a lot more surefooted in the technical areas where the Crow's get sketchy.

The biggest difference was in decending some of the rockier sections. I didn't feel like my bike was bouncing all over the rocks and that the tires were liable to be cheese-gratered over any 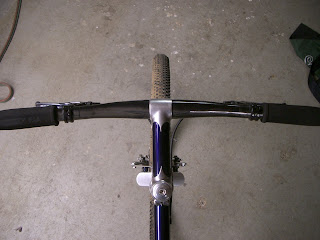 sharp rocks (which is pretty much how the crows make you feel). It was nice.

All in all, I say if you've tried the Crows and felt they were a little too sketchy on tread for you, you should really check out these tires. I think you'll dig 'em. I'll probably try to run them tubeless and see how that feels. But for now I'll probably run the crow's out at Buck hill as they're still tough to beat for big steep climbs on a singlspeed.

I am considering trying these at the Cable Classic though, they roll fast and it tends to be wet, slippery and flat in Cable, might be less than ideal for the Crows.

Last night was the big Derailleur show at Memory Lanes in Minneapolis. It was a fund raiser for the Minnesota AIDS Ride, and I'd say they had a pretty good turnout. We had a great time and I felt like we played an excellent show. The sound was a little funky being that it's a bowling alley and we're set-up right in the middle of the lanes, but most folks said it sounded pretty good. Got to debut my "new" drums for the first time outside of my basement and they really do put out some killer sound. I don't know exactly what it is, but there is definitely some magic in these old Gretsch babies!

in shop talk, I've just been catching up on small jobs that have been waiting. Build three new forks and did a couple repairs. I've got a few repaints next then back into new frame orders, the fun stuff!