So much going on, lets start with the bad. We're in a winter storm watch tonight here in the cities. That sucks, really truly sucks. I'm sooo ready for spring to come it's not even funny anymore. We've had some really warm weather earlier this spring, but of course I was out of town for all of it. Ok, I don't even want to talk about the weather anymore.

Let's talk about utility biking. I don't know why, but I love combining errands with riding, they're just two great tastes that go great together. Maybe it's because riding time is so precious to me, maybe I'm just a glutton for punishment, but there are few rides I enjoy as much as one where I'm loaded up with stuff going from store to store.
I did just that yesterday I had 4 packages to drop off at two different places and a few other misc errands to run. One box was a fork, which is pretty long, tough to fit in the messenger bag (even my XL Bailey), so out comes the BOB trailer. Hitch that baby up to the RB-1 fixie, throw on some knickers and your stylin! or at least you got a rig that turns a lot of heads in town.

If you're not buying it, you really ought to give it a try, I think you might have fun. Besides, it's a great way to get in some riding while conserving some gas and milage on your car. 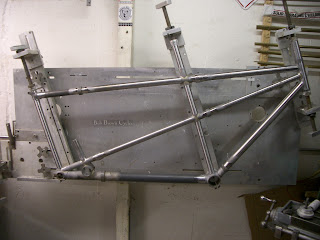 The tandem is coming alone nicely. Actually as of tonight all that's left is some finish sanding on the frame and it'll be ready for paint. My pictures aren't coming along as quickly as the frame, but here are a few more.

Here's a shot of the frame as it sits completely jigged up and ready to braze. As you can see I have all the lugs completely done prior to brazing the frame together.

From here I flux everything up, tack it and pull it out of the jig for the first alignment check. 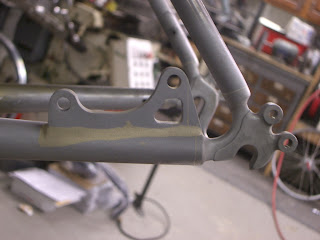 This frame is full of details, little things. Here's one that I like, the bike is built for a disc brake in back, caliper in front.

The owner wanted mounting for a light rack and possibly fenders along with the disc caliper in back. That can get tricky, so rather than try to cram all of it on top of the seatstay and have to do funny things to get the rack stays to clear the disc caliper I moved the caliper between the chain and seatstay. This has a few benefits on this particular bike. First, it tucks the caliper neatly between the tubes which tend to make it look cleaner and be less prone to getting damaged. Also it puts the brake load on the chainstays rather than the seatstays which is good here. The tandem chainstays are quite beefy and since this bike doesn't have a rim brake, I can now use a lighter seatstay to save a touch of weight. Finally I got to make a neat brake mount with a little more style to it. I carved this one from 3/16" plate. Still have a little cleanup and shaping to do on that brass fillet, but you get the idea.

I also chose to use Henry James Dropouts on this one, which is a departure for me. I typically don't care for them much, but they really fit this application well. The tandem chainstays are larger diameter than most, so the large touring dropouts fit the diameters really well. Most forged dropouts tend to look a little small in these larger stays. Plus they're stainless, so they'll be a nice touch to go with the stainless couplers and headbadge.

I'm getting excited to see this thing done and painted. I think the whole bike is going to be stunning once it's built up. All the parts are coming together and hopefully it'll have paint on it this weekend.