Paint is on the tandem, I sprayed the final clearcoats last night. I tried to take a couple of quick pictures of it, but you really need to see this thing in sunlight to get the real color.

The fluorescent lights of my shop make it look a touch more teal than green, but it's really a dark green. I'll get some pictures of it in sunlight soon. 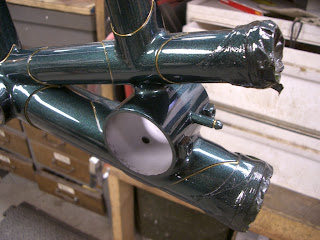 I spent 4 hours last night doing all the lug-lining. Yes, 4 hours straight trying to keep the hand steady. Despite the shear volume of lug lines, I think it went quite well. Now I've got a few hours of removing masking and it'll be a frame! More pictures later.

In preparation for Fruita, I picked up some new tires for the 29'er. I've had a few sets from Kenda, and while they all perform well, I'm really tired of their crappy weight labeling system. I got a set of Small Block 8, 29'er tires and right on the packaging it says " 500g +- 25g". They average 560g, seems to be a flaw in their measurements. Kenda Karma tires, clained 550g, out of 4 tires, they average 640g. That's a pretty big difference for something being sold as a lightweight tire. Kenda, get it together.

Made a few more minor adjustments to the 953 road bike last night, hopefully I'll get to sneak out one more ride on it before Fruita to make sure everything is good to go on it. Since we're driving the hippie van out there, we're taking road bikes too, so I'll have the 953 bike out west. If you're going to be out in Fruita for the Festival and want to check it out, let me know.

Good luck on your trip... stay safe and don't over do it.

Talk to ya soon-

The 4 hours show - a wonderful effect. And what a steady hand! I hope you get some sunlight soon in St Paul - it has been lacking in Upstate NY. The green looks great even as teal! Your trip sounds like fun - enjoy yourself and the reflected glory when others see what you are riding.