As usual there's been a awful lot going on and I haven't had any time to write about it! First, I got around to snapping a couple of pictures of the finished trim in the house and the new bed: 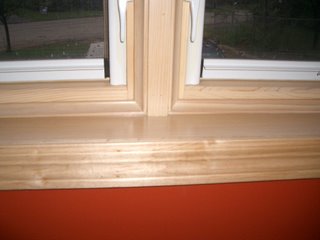 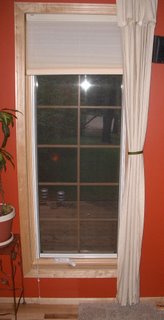 They really came out great I think. The Maple looks nice against the darker orange walls, and the pine windows came out really close in color to the Maple trim once it was stained white. 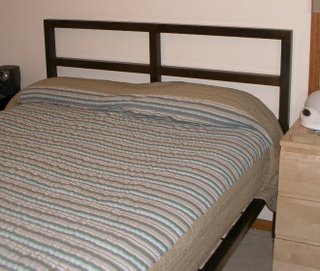 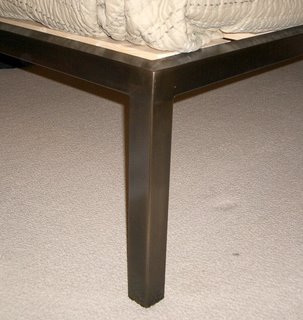 Again, I'm thrilled with how this came out. It was a great chance to brush up my welding skills. Since I only braze bikes these days, I haven't been using my welding as much, so I had to do a few practice beads to get going. Especially since I was using a mig machine for this and I'm really more used to Tig or stick welding. The mig is so easy though that it came back quickly and I cranked this out in about a day. The frame is 14g 2" x 2" tubing, I had to make caps for the ends that would have been open, weld 'em on then grind it down to look like there's no cap as shown on the picture to the right.
To finish it off, I used a metal darkening agent to stain it but keep the bare-metal sheen, then I cleared it with lacquer. Overall, a very fun project, I'd do it again. It also made me anxious to get going on the new entertainment center we've been wanting.

Onto other topics, Saturday was the second annual Twin Cities Amazing Race (TCAR). Some of you may remember my report from last year when my 3 person team won the 7 hour race by less than a minute. Well this year the race took about 6 hours and we ended up second by about a minute! Unbelievable how close these have been considering the overall length and the fact that all the teams on on their own.
The format changed this year inorder to make it a bit easier to organize (a worthwhile goal). We were given all the clues right up front at the start and got to try and figure them out to determine all the destinations right away. They we plotted a route and hit each one. There was a team challenge of some kind at each station this year, which took some time and skill.
The clues were much more difficult this year and I think that ended up being out main shortcoming. We were the last team to leave the start by quite a bit and still didn't have one of the clues figured out! We certainly were not the brightest team, so we knew our riding would have to make up for it. Unfortunately for the rest of my team, they had me, so our riding was limited to how fast I could struggle along.
We chose a little bit different strategy from all the other teams, and plotted our course basically backwards of everyone else, and that part worked really well. We didn't have to wait in any lines at any of the skill stops which saved us a lot of time over a few of the teams (some teams waited up to 45 minutes for one station). However we made a fairly critical mistake in leaving without solving that one last clue because as it turned out that station should have been our first stop, but we ride right by it!
So in the end we had to go past the finish, hit the last station and ride back to the finish, unfortunately that delay was enough to cost us the win, another team rolled in a couple minutes ahead of us. Oh well, next year.

Sunday I spent the day working on the house again. Beth's folks and a few friends are coming next weekend, so we're madly trying to get the house inhabitable by other humans! This is actually a good thing because the clutter was taking over ever since construction was finished, and this is forcing us to clean it up. I for one am really, really tired of living in a house full of clutter and mess and I'm pretty sure Beth is too. So yesterday I cleaned a lot, painted a wall, caulked 2 showers, bought a new mattress for our new bed (and moved the old one into our guest bedroom) moved furniture and built shelves in a couple of closets.

My next mission is to start designing the shed Beth's Dad and I hope to build this weekend. It sounded like the big plan of action for the weekend was to shop and Bob (Beth's Dad) and I hold roughly the same views on shopping: if it doesn't involve tools, it's not worth it. So we're going to do something that sounds much more fun to me, build a shed.

That's about all I have time for now, write at you later.

I really like your new bed frame-you could go into business! As if you'd find the time!

The bed looks exactly like my bed from Room and Board....but somehow I'm guessing it wasn't nearly as expensive. Nice!