The bad and the good

It's been a bit of a strange past 7 days. Last week we lost electric in 3 circuits of the house, but none of the breakers tripped! When I went down to the breaker panel to start working on figuring out what happened, I realized the carpet under my feet was squishing. We had a big rain/storm last Tuesday and one of our gutters fell down and just happened to pour all the water coming off the roof into one of the basement window-wells, which filled up and ran in the window into the basement. So I tore out all the carpet in that end of the basement and dried it out.

Meanwhile that electric problem didn't fix itself, so the next night after work I tackled it. Things just didn't make sense, wall switches were turning on lights that they weren't connected to, and I had one outlet measuring 240v! After removing many switchplate covers I found a bad wire junction. It was an aluminum to copper wire junction and somehow it wasn't properly insulated with the slimy goop you put on those kind of junctions, so the copper wire had corroded and broke. Also unfortunately this part of the wiring was from back when it was up to code to not only have aluminum wire, but to have more than one circuit feed wire share a common return wire. My whole house is wired this way (well except for the new addition, which is up to modern codes). So when that junction broke, the returns from multiple circuits were combined and sent enough voltage through one circuit to actually pass through the closed wall switches! not good.
I fixed that one up quickly.

Then this weekend the phone line went out. So if you've been trying to reach me at the shop phone # and the line just kept ringing, it's not that I don't want to talk to you, it's that we don't have a phone line. I knew this one was outside the house so I had to call Qwest to come out. They've run a temporary line, but still need to replace the whole underground line to the house. Honestly we've had nothing but problems with this phone line for the last couple of years, hence I've decided to officially change my business phone line to a cell line. So from this day forward the new Bob Brown Cycles Phone # is 651-247-1851. The website has been updated to reflect this. I'll be keeping the old number active for a while though since I've got a lot of business cards and information out there with that number.

Now onto the good stuff. 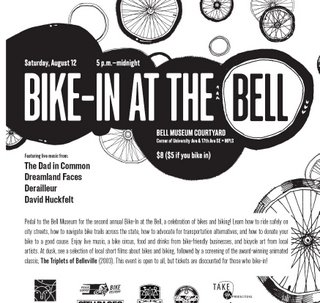 This weekend is the Bike-in at the Bell, a bike-centric event held at the Bell Museum on the U of M campus. Not only will my band, Derailleur, be playing the event, but I'll also have a booth set up. I'm putting together a booth to promote local framebuilding in general. Eric from Peacock Groove is going to be there with me showing off some of his wares and methods as well. I think it'll be a great event, so if you're free Saturday night, roll on over and say hi.

There is an entry fee to cover the entertainment costs, but it's discounted if you bike in, click on the image for full details.

In other news, I'm just about caught back up on shop work, finished up another frame and a few paint jobs this week. I also just got word that my first shipment of Reynolds 953 tubing should be on it's way very soon along with a few related goodies, so keep your eyes peeled for pic's sometime here. I've also completed the design and ordered materials for the first prototypes of my new semi-stock 29'er frames which will hopefully be sold a few select stores by the end of the year. I'll talk more about those later.

And you're gonna be at the Bike-In? With a booth and beatin' them skins? And Peacock Groove stuff 'll be there for viewing? I have got to get out there!

Yup, I'll be at the Bike-in, spread the word, we ant to make this thing BIG!

Unfortunately both Curt and Chris Kvale are out of town this weekend or they would be there as well.

Sorry I wasn't down there for the show bbbb. I was hoping to follow up my last appearance at your show of being drunk and center with a old school stage dive. Next time.