Man, what a week. The week before Christmas is always busy for me, but usually it's simply due to my procrastination of buying holiday gifts. Not so this year, got all the shopping done prior to this week, but yet here I am, going insane. Work got bad this week and I had to take a fast trip down to Little Rock AR with no notice. And traveling this time of year sucks. Really sucks.

Maybe I'll start there, with Little Rock since it's kind of a funny story. I wasn't going for any noble reasons, really just one of those required political statements to show them that I care...

For those who don't know, Little Rock is pretty much a hole. It's tiny, not very nice, and full of some rather unusual folks as far as I can tell. The plant I service is actually in College Station, which is far worse. This is true poverty, people living in shacks that are half fallen over with a dozen rusted out cars rotting in the yard (this one isn't hyperbole, that's sadly what you will literally see driving into the plant). In the winter months you usually pass a group of guys huddled around a 55 gallon drum with a fire burning inside, warming up their fingers, and their throats if you know what I mean (think drinking out of paper bags at 6 am). The three liquor stores I pass on my way in (I think those are the only stores I pass) all have 6" steel pipes filled with concrete all along the front side of the store, along with steel welded grating over the windows. Otherwise people drive their cars through the front of the store to get the booze (seriously).

Here's a short synopsis of my trip down to the plant, this seems pretty typical when I travel down there:

So I get a rental car, one way to Little Rock, and head out. It's all interstate to Little Rock, I-40 all the way, should be flowing free and smooth, or so I think.
About 20 miles in, traffic slows to a crawl for a few minutes, until I get to the source of the problem: a Honda Civic on the side of the road. Now if it were just a broke-down Civic I wouldn't think anything of it, but it was actually a Civic that was being towed. Now don't read that last line as if it was actually in the act of being towed. It had BEEN towed by the front bumper until the bumper came off! Yes, the bumper was laying there, along with the chains they were using to tow it. No sign of the actual tow vehicle, they were probably on their way to the Honda dealer to complain about how crappy that car was, the bumper just flew right off!

So traffic moves again after that, for about 50 miles. Then it slows up again, and I see a road construction sign. I'm in the left lane and there are semi trucks in the right lane, so I can't see much over there. There's a sign on the left shoulder though that says "left lane ends, merge right". Seems pretty simple, going to single lane, so I better get over to the right. Well, when I merge right, I notice there's a sign on the right shoulder at the exact same point that says " right lane ends merge left"! So some genius at the Arkansas hiway department couldn't decide which lane ended, so they marked both! as you might guess, they didn't actually both end (that would have been something!), the left land ended, but it completely screwed up traffic for a while.

Finally about 5 miles out of Little Rock, I seen something unusual on the side of the road (even more unusual than the previous things). There's a full size pick-up truck that appears to be on fire! I thought it was an engine fire, but the flames were really high. As I got closer, I realized it was the contents of the pickup bed that were on fire! looked like someone was moving, it was mostly cardboard boxes full of who knows what, all going up in a blaze of glory. Really, how does the contents of the bed of your truck start on fire? I could see an engine fire if something went wrong, but most people pickup beds don't spontaneously combust.

But I eventually made it to town, got my work done, then got the hell outta there. I'll write more about Little Rock some other day when I have more time.

On the the house. I finally have some pictures. I found the batteries for the camera and snapped off a few shots: 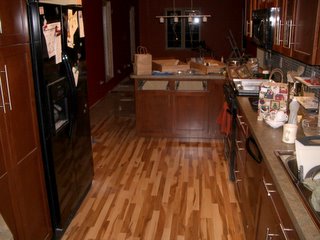 Here's how things look from the kitchen looking out to the new room. Note the cabinet at the end of the kitchen is finally in place along with the countertop on it.
The flooring is al new and runs out into the new room and the hallway. It's solid 3/4" maple. I love how it came out.

Try to ignore all the junk on the countertop, there's just clutter everywhere right now, but we're working on that.

Here's the hallway, you can get a glimpse of the wall color in the main room, and the hall. 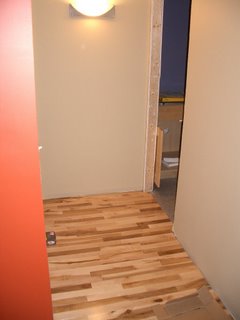 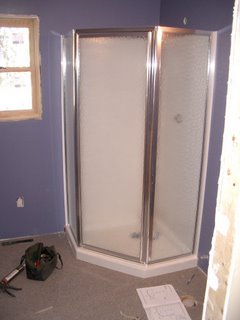 And, here's the shower in the bathroom. It's about all I have done in there other than the floor, but it looks good. We love the wall color/floor combo. I'm hoping to finish this room up next. 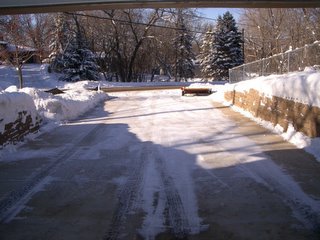 And finally, here's a view outside the garage door now that we have a little snow. It sure is nice to have a flat driveway! The snows been great, I just wish I could have gotten out skiing on it more this week.

Well, that's about all for right now, I gotta run.

Have a great holiday season, whatever holiday you celebrate.

Your Little Rock travel story was very entertaining. You really should consider carrying a "pocket" digital camera with you to capture some of the scenes you describe. Your "road warrior" stories will continue to grow as you travel. I know business travel can be tiresome, but it is a price you pay for being responsibly employed.

Mike, Merry Christmas to you guys as well!

I do actually usualy travel with a camera as I need to often take pictures of things in the plants. But it seems that the really odd stuff happens when I'm driving and I really don't like to take pictures while behind the wheel! I actually do have some entertaining pictures from other Little Rock trips, I'll have to get some of those on the blog.