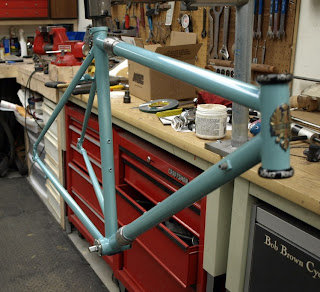 I've been doing what feels like a lot of painting lately. It's not as much as it feels like, but I've been shooting paint over at Curt G's shop, breaking in his new booth and giving him some pointers. He's learning to paint, so spraying over there gives me a nice place to shoot, and him a chance to see someone else's technique at the same time.

Shot this S & S retrofit and a couple others this weekend. Nice little Bianchi frame that's now been touched by three local framebuilders. Chris Kvale added the rear eyelets a couple years ago, I replaced the downtube and added the couplers, and Curt tried his hand out at laying some base color coats on the paint job. The paint is my own home-brew mix to recreate Bianchi's famous Celeste.

S & S seems to be the hot ticket right now, all three frames I painted this weekend had couplers and I currently have 4 frames waiting in my que for retrofits. It's all good by me!

Here's a fun one that's available! 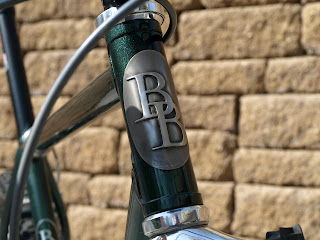 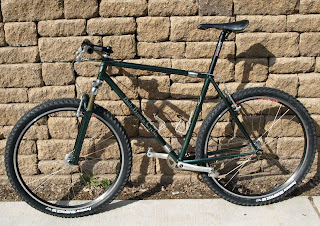 This bike isn't actually new, it just looks that way. I refurbed and repainted it to have as a demo bike. I suspect it'll end up at One-on-One very soon with a for-sale sign on it.

It's designed to do it all. Currently set up as a singlespeed, but it has a derailleur hanger and full provisions for running gears. Fits nice fat tires, the tires on there are 2.3" Panaracer Rampages! 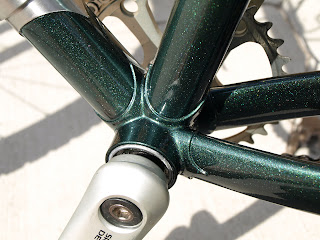 Pretty sweet build kit on there too, if I do say so myself. Paul's brake and levers, XT spiderless singlespeed cranksetup (with spot ring), super-trick nuke-proof singelspeed wheelset with Velocity Dyad rims, Truvative Team bar and stem, Cane Creek S-6 headset, Raceface post. All the good stuff... If you're one of those folks that like those gear-changing thingy's, I can set it up with gears for you, no problem. 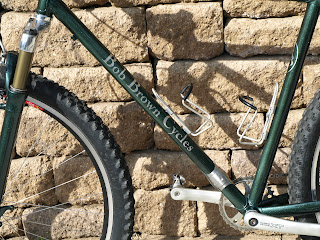 And the paint... It just jumps out at you in the sun lig 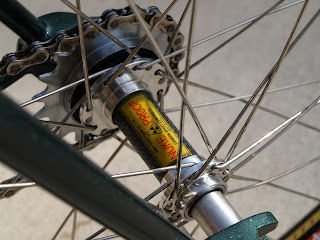 ht. It's a house of color green pearl over black, looks like a British racing green, but with tons of metalflake to make it pop! Chrome painted in logos and of course a stainless steel headbadge to finish it off.

If you're interested, email me. You're welcome to take it for a spin. Otherwise like I said, hopefully it'll be down at One-on-One soon and you can check it out there.

Ah crap, the nuke proof hubs, I completely spaced! Is the front the one we were going to trade? I guess that means no trade, eh...

Sorry I didn't get back to you, but I really wanted 32 hole hubs for rim considerations, so I just built up these.

You know everything's for sale! THose wheels are no exception.

No problem, now I remember you seemed dissatisfied with the holage...

Let me know if you dig up another fat front nuke proof hub.