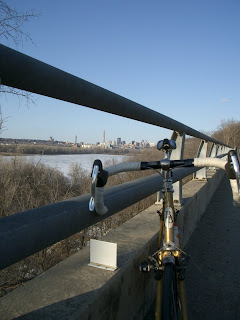 Finally got in a couple rides this week. The mercury hit 55 Wednesday so how could I possibly resist. Rolled around St. Paul mostly, across summit, through minnehaha falls, to fort snelling and over to lillydale. The lillydale trail doesn't get plowed so it still had a good layer of glacier on it so I opted for the hilly road route instead. While my legs were not ready for any hills, the view was good. Perfectly clear day, nice view of downtown coming back home. I managed to drag this one out for almost 3 hours of fixie action. felt good. felt bad.
Thursday was warm again, but not quite as warm, about 45. The forecast was for big snow Friday though so I figured I might as well go for another spin before I was snowed off the roads. Road north this time through roseville to run an errand. Felt great for the first half, till I figured out I had unknowingly been reaping the rewards of a tailwind. The ride home felt brutal, and to make things worse I popped a rear spoke abotu 2 miles after I turned around which threw the rear wheel waaaaaay off. Rode home into a stiff headwind with a rear wheel rubbing the brake and frame. Oh well. 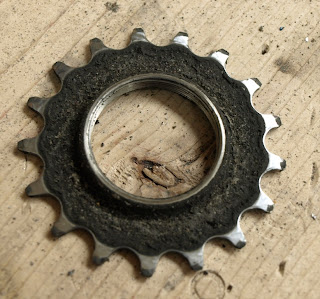 Got home, fixed the offending spoke and re-tensioned the wheel. Hard to complain when it was a wheel built from used parts about 20,000 miles ago. I just can't escape my inner cheapskate.
I had to pull off the cog to change the spoke. It's probably been 3-4 years since that cog came off, I was amazed that I got it off without too much ordeal. But I was amuzed enough at the appearence of the gritty cog to snap a pic. I love how much crap is caked inside, yet the teeth are nice and polished (and hooked!) from chain wear.
Ahh, the little things in life..
And pushing on with all my forking lately, finished 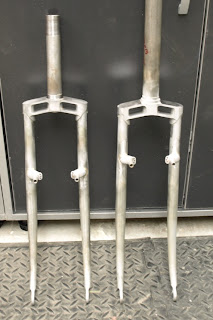 up three more forks this week. here's two of them.
I've felt like all I've done the last few weeks was build forks. Don't know why, but people keep asking for 'em. It'll be good to get back into some frames next. I've got a whole slew of stainless frames coming up in the que.
enjoy the snow you locals, happy Easter.
bbbb
Posted by Bob at 11:50 AM

Im curious how your fixed gear bike is set up, do you have any pics of it on your site?

That would depend on _which_ fixed gear bike you're referring to, I have a few of them.

THe fixies I ride far more often (for errands and such) is my Bridgestone RB-1 converted to fixed use, but with riser bars on it. Pretty upright, fatter tires, good for pulling my bob trailer and carrying goods.

Here's a link to a pic of that one: