seems like more time has passed since that last post, but lots has transpired. chronology here.
Thursday night, greatDerailleur show at the 400 bar. We played the middle spot between two other bands, two bands that should thank their lucky stars we were there otherwise they woulda been playing to an empty room. First band literally played most of their set to the 5 of us and a couple of our friends that showed up early. Last band (speaker speaker) was from Seattle and consisted of a couple of just out of college age guys clearly just trying to make it across the US getting shows anywhere they can. No local fans since they weren't local, and loud as hell. I think they were good musicians, but the sound dude had them way too loud for the few people that were left in the room. Drove me to leave 3 songs into their set. Thanks to all the fans who came out for our show, we had a great time. Thought our set went really well.
Friday: head to the Vitch's for his final, clear-out-all-the-Kenwood-cyclery-crap-from-my-basement garage sale. I wanted to get in a ride so I decide to ride my bike over to chez-vitch in south Mpls. I had a couple alterior motives as well. I was going to meet TSP and Tomac in Longfellow and ride in with them, so I hauled the two suspension forks I had for them over in the b.o.b. trailer. The Vitch still had my S&S 29'er from his trip to singlespeed worlds in Scotland, so I planned on picking that up and hauling it home in the trailer as well.
Got to the sale to find a few other kenwoodies there picking through the goods. Most of the stuff I recognised from the shop as stuff I had passed on then, but I did pick up a few goodies. Most notable in my book: the Waterford sign from the shop (will look great in my soon-to-be renovated shop), a full Modolo speedy brake kit, with lots o' small parts for brakes (I can't imagine anyone else at the same could have used that one) and a super-cool aluminum chainguard that will inevitably end up getting polished out and fancied up for a BBC someday.
Add in a pair of shoes for a customer of mine, a few other odds and ends, all the extra clothing I brought and I had a really full trailer and messenger bag.
Loaded everything up into the b.o.b. with a 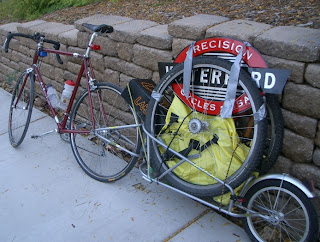 bunch of bungee's and duct tape and set off on my way about 10pm, the temp had dropped to the point I could see my breath now. Ordinarily it's about a 50 minute ride home from the Vitch's, but that trailer kept feelin' heavier and heavier the closer I got to downtown St. Paul (probably had something to do with knowing I had 2 big hills to hit before I got home). I stopped for a short rest near downtown. I had the foresight to know I'd be doggin' it near the end, so I brought some food which I promptly scarfed down. Got back on the rig, checked the clock. It was 11pm.
Finally rolled into my driveway about 11:15. Felt good to get inside and warm up. The Xl bailey bag on my back kept that part of me warm, but my feet were getting a bit frosty.
Sat, put the finishing touches on two

953 'cross frames and got one of them ready to ship out to Oregon. This one is double oversize tubing with a neat seatlug that I'm really digging. I like the clean look of the seatstay sockets in the lug, my only grip is the lug is a looser fit on the top-tube, hence there's more silver visible between the lug and tube and it's harder to make that look clean. This one has indented 953 chainstays which I was able to manipulate to get 50mm of tire clearance between them! This one is a disc only frame, no canti mounts, and just hose guides brazed on the frame. 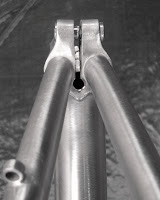 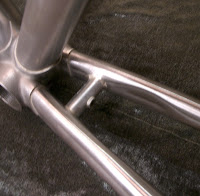 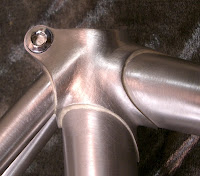 Pardon the bad picture placement formatting, blogger sucks for placing pictures.
The other one is heading to Marko Lalonde for the rest of his 'cross season. He's been ripping it up out there this year too, including finishing 11th and 14th this weekend at the UCI double header in Cincinnati (nice work darkness)! I'm really excited to have him and Jesse racing for me this year. And for the record, brother Jesse won the Badger 'cross in Madison this weekend
I wanted the logos to pop out a little more on this frame, so I painted in some panels instead of my usual etching on the stainless. I like the look. 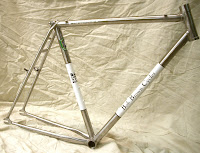 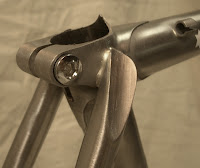 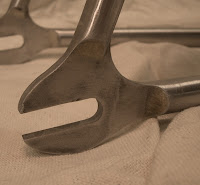 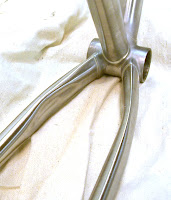 This one had a whole lotta custom stuff. I had to make the track dropouts from scratch, this was the first side-tack seatstay I'd done on a 953 frame. I was worried about how much silver would show around the stays, but now that I see it done, I love the look. It shows off the inverted tube brazed in to make the scallops (no investment cast plugs here, those are for the lazy). The chainstays are the first 953 bent chainstays (anywhere as far as I know) and when combined with the indentations give clearance for 2.2" 29'er tires. It's a cross bike by design, but it's got clearance for full 29'er tires and is actually just about the same geometry as my personal 29'er. I really love these 'cross/29'er rigid frames, they're about as versatile as a bike gets, and they handle both applications extremely well.

Sunday I raced. What a day for cross, raining and about 45 degrees all morning, got the course all wet and slick in time for the start. I stuck in the B race and I think my total lack of training will keep me there this season. Started mid-pack right behind Freeride and rode most of the first two laps just a person or two behind him. There was a huge pile up right at the start and we both managed to get around it. About lap three I was feeling good so I ramped it up and passed freeride and a few others. I kept it going till the last lap, and once again I hit the wall on the last lap. I didn't lose a lot of ground, but I could tell my last lap was considerably slower than the rest. That was confirmed by the Cutshall superfans who were gracious enough to give me hand-ups during the race and unbeknownst to me were timing my laps. Thanks Team Ultra!
Good day of racing, however I will whine about the stupid course. The Ridley folks (formerly Alan folks, *wise-ass Alan comment deleted*) put on this one and they usually do a great job, but this year taking out two full sets of barriers only to replace them with a series of 12 180 degree turns (think of a riding your bike through the line que at a Disneyland ride) was 100% lame. It did nothing for the race and kept the people with any kind of real 'cross skilz from using them. Oh well, other than that it was a great race.
Alright, I'm outta time, so write at you later.
bbbb

Those are NICE! I've been waiting to see who was going to put out a custom
953 cross ( I know IF has been working on it, but I haven't seen it yet). What were the frame weights if you don't mind me asking?

Supposedly IF has a few under team riders, but I haven't seen any pics either. Marko's frame is actually the first 953 mtb frame in the world (as far as I know). Meaning frame with enough tire clearance for true mtb tires.