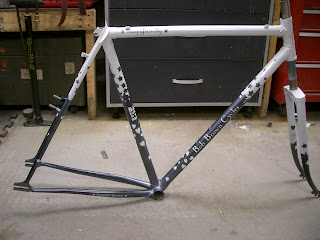 I finished up two more paint jobs this weekend, including Jesse's frame. This ting was the bane of my existence Sunday. I spent almost 3 hours applying all the masking only to have the paint wrinkle up once sprayed due to a chemical issue. I fixed that, but couldn't fully sand out all the wrinkles, so there are a couple of hearts in there with some texture in the paint, but it's not bad. 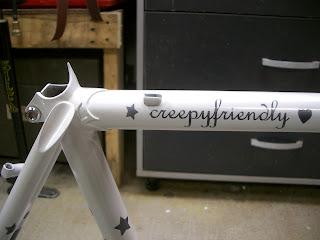 Then the colors disappointed me. The frame was supposed to be black and white, which it was. Then I added the pearl over it (which I thought would be translucent) and it turned my stark black into sort of a gunmetal gray. It's actually a really cool effect and color, but I was hoping for black. But Jesse needs it for 'cross so it will suffice for now, I can respray it after the season's over if he wants. It's still a super-cool paint job that will 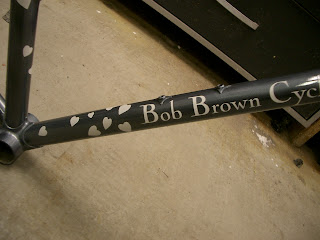 be killer with the BKB racing kits. Can't wait to see him out there ripping it up on this baby.

Just for the record, everything you see on here is painted in, there's not a single decal on the bike. Talk about a lot of masking...

I'm still madly working on getting the other two 953 'cross frames in my shop out. One if over half done, the other is getting there. More pic's of those coming soon. I've been held up on progress on them due to a very late shipment of the stainless dropouts and a few other bits. Those just showed up yesterday, so I should be able to get moving again on 'em.

In other news I've had absolutely zero progress on moving the shop, everything is still in disarray and I suspect it will be until I can get these next couple frames done. I should have time this winter to really get that space set-up how I want it, but not much time till then.

I finally got my 'cross bike all set-up this weekend and even snuck out for a quick ride on it yesterday. I've been running 3-4 times a week so I felt alright, but my technique was a bit off since I haven't been riding at all. I think I'll be fine though, I won't make it to a race till Oct 6th at the soonest, so I have a week or two to practice my dismounts.
I'm trying something new this year, in all my consolidations of bike stuff, I sold off the wheels I usually race 'cross on. I was thinking I'd use my Reynolds carbon wheels for racing, but I'm actually going to try something else first. I set up my King/Stan's ZTR 29'er wheelset with 'cross tires and Stan's goo. The ZTR rims are as lgiht as most road rims, and with the Stan's yellow tape and tubeless set-up, they're actually lighter than my old race wheels, plus they're tubeless, so I can run low pressure. The rims are wider than most road rims, but that only gives me more tire contact patch. I think this might be a great set-up for 'cross. They felt good last night, but it was a short ride, I'll write more about it after I spend some time on 'em.

Completely unrelated to bikes, I installed a new stereo in the Jetta last night. I'd been wanting to replace the old one for sometime and I've been kind of itchin to have a receiver with a good i-pod integration and HD radio capability. Not to mention I missed my old Alpines with high-voltage pre-outs, they just sound better than anything else.
So I scored the Alpine I wanted on Ebay and finally got it in last night and I'm thrilled. Not only does it sound as good as my Alpine's of old, but the i-pod integration is killer. You plug the i-pod right in the docking connection and the receiver is now your controller. You have all the same controls of the i-pod but they're right there on the deck and it charges your i-pod while you drive. Slick. Can't wait to hook up the HD radio (hopefully today or tomorrow).

If anyone in blog-land needs a basic car CD 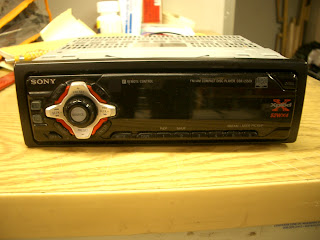 player I've got the Sony X-plod CDX-L550x I pulled out. It works fine, but is more susceptible to skipping if your CD's have scratches (as every Sony CD player I've ever had has been). Only one set of pre-outs, but if you don't have any amps, it's a great unit. $50 + shipping, how can you beat it.
Posted by Bob at 7:36 AM

What tires are you using with the stans. Sounds like a great set up. Been curious about cross tubeless for a while.

I'm running Panaracer cross blasters on the ZTR rims. They seem to be working really well running about 30psi.

is that Cd deck still available? does it have an Aux in the back?