Horrible, that's what my dedication to this blog has been lately. It's been really tough finding the time. It's been two and a half weeks since I've posted here and I think I've done 3 rides in that time. Sad.
I did what will be for me, the last Buck Hill race of the year last week. Technically there is one more this week, but I won't be able to be there. Man it's gotten rough out there. For those of you not in the Twin Cities, we're having nothing short of a drought up here. No rain for pretty much the whole summer, which has literally turned riding at Buck into a race at the beach. The trails are all sand, some places almost unridable because it's 6" deep. It's been a challenge to say the least. Sure hope we get some real rain here soon. 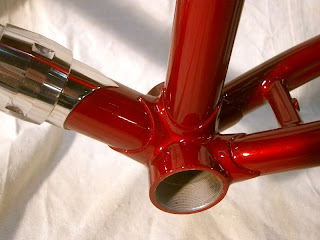 Even though I'm not writing much, I've been really cranking out work. Since my last posting I finished up another frame and painted four others. Paint has really been frustrating for me lately. Dupont went and changed the chemistry of the clearcoat I use again and it's really hosed me up. To make it worse on the last batch of 3 frames it appears that I got a bad can of activator for the clear so all of them had horrible clears and I had to respray them all multiple times and completely start over on one of them.
I think I've finally settled in on a new clearcoat, it's a higher-end product, so it's expensive at about $75/quart, but it really looks nice and lays

flat. Combined with the new Iwata gun I've been using I can now use about 1/2 the liquid volume of clear and get a deeper coat and better shine. I'm still working out a few quirks, but I think I'm on the right track to clearcoat nirvana.

The one pictured here has painted in logos on the downtube, which I really like. They're sprayed with Chrome paint and buried under clearcoat. Looks sharp with the polished stainless lugs and couplers on this one. More pictures once it's built up. 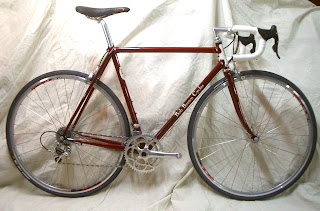 I finished assembling this one too. Really nice little bike with the Campy Centaur group and Nitto parts. This one should be on it's way to the new owner very soon, hopefully in time to get in plenty of good riding yet this summer.

I really like the Centaur group, but I wish Campy would have kept the polished finish brake levers. For 2007 they went carbon on the lever blades. They keep trickling the carbon down further into their lines making it harder and harder to make a classic looking group with high end parts.

In other news, I've also started into the final stage of our overall home improvement scope. Faithful readers will no doubt know all about the addition to the house, well I'm on the last step, turning our basement stairs around 180 degrees. Anyone that's been in my basement knows this is no small task. It's taken me 2 weeks already to clear out enough space to stage all the construction. So I spent a lot of time this weekend moving stuff away from the stairs in preparation for demo.
When it's all said and done, the shop will be completely rearranged, we'll have new stairs and a new front entry closet upstairs, and best of all a new hallway from the garage straight up the stairs so that we won't have to walk through the shop to enter the house. That should do wonders for keeping the house clean! I'm actually really excited about getting this done. I just need to dedicate the time and do it!