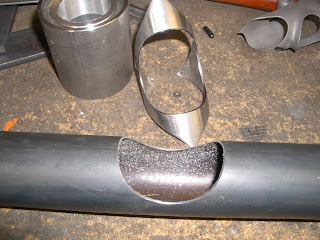 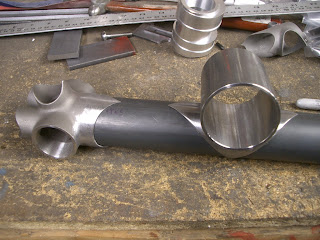 A folding tandem, wow! That makes great sense, though.

Using a blog to document the construction of a custom bicycle adds a whole new dimension to the process of acquiring a bike. It allows the future owner to gaze in fascination as superb craftsmanship transforms steel tubes of different lengths, widths and alloys into a new frame. When there are more than 1,000 miles between the builder and the frame’s future cyclist, it is like looking over the fabricator's shoulder - and not nearly as annoying!
It also makes public the process of manufacture that has disappeared completely with mass production and outsourcing overseas. Bob,It may well be worth your while collecting a group of these projects together at some later stage for some form of publication as I know a wider public is fascinated with this complex, precise and artful process.

I completely agree with Adam's comments.

Bob will be building a bike for me later this summer. As I was conducting research about builders, I found Bob's blog to be an incredibly rich source of information. In fact, the care and attention to detail that go into Bob's work, which is so clearly demonstrated in his blog, is one of the most significant reason that I ended up throwing my money his way.

I can't wait to see pictures of my bike appear on Bob's blog. Though my bike is many months away, I eagerly await the posting of new photos - even though they are not of my bike they make me excited for what is to come.