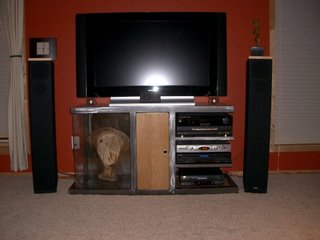 Well, it's 2007, might as well start it off with some new furniture pictures. Yup, more furniture building in the last week of 2006.

This one is for our own personal use though. We finally pulled the pin on upgrading our 15-year-old TV as a mutual Christmas gift to each other, so we needed something set it on and hold the other components.

I had built our previous entertainment center too, it was a much larger all wood unit built from solid Aspen with a huge subwoofer built into the base of it (if anyone local is interested in it, I'll give it away just to get it our of our garage, includes a free 27" JVC TV!!!). We really wanted something much smaller and more modern, so after about 10 design iterations, this is what I came up with. 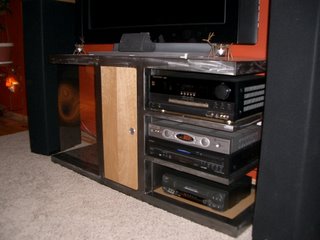 Basically steel framed construction with mostly Birch shelves (the display cabinet side is all metal). Surprisingly it took me almost twice as long to make this as it does a bed frame. There's less metal in it, but more welding and more accurate measuring (which takes time). The A/V shelves are completely cantilevered from the main frame, and there's a nice cord-management set-up behind them you can't see (to keep things tidy). The door was a bit tricky as I didn't want any exposed hinges. I had to weld in some extra recessed tabs to mount a special flush-mount hinge inside. 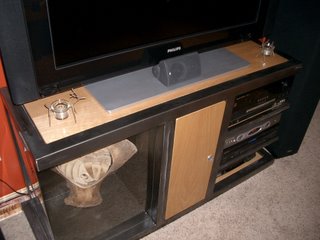 The finish of the steel was tricky. It looks really simple, but took quite a bit to achieve. We wanted it to look like bare darkened steel. I initially just did my usual black-oxide finish (that I use on the bed frames), but it gave it a slight gold-hue which didn't look good with the orange wall behind it. So sand all that off and try to figure out how to darken the metal but not make it look "coated". I really wanted the sanding marks to show through, but I didn't want the finish to be as bright as bare steel (which is very shiny silver, not gray). 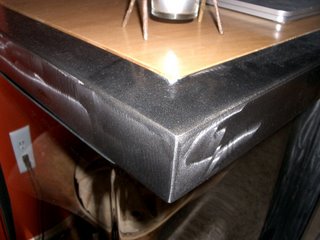 So three coats of translucent paint later and a couple of clearcoats and I had my desired effect.
If you look really close you can see some small droplets of paint in there, but more than 6" away and it looks like bare gray steel.

The top and shelves are Birch, just finished with clear poly. I wanted maple in there, but had a difficult time finding wide enough boards. I didn't really want to hassle with edge gluing up boards for this project, so I just switched to Birch. They look incredibly similar.

Just to keep things all matchy-matchy (as Beth always says I like things), I make some maple tops for the Def-tech speakers on either side of the entertainment center. I think it all ties in nicely with the room's colors and Maple trim.

Not exactly a bike, but a pretty neat project I think. I've got one more bed to crank out soon too!

In the bike world, I finished up another frame and fork this weekend and got another route 29'er half built. I think I'm really getting those down pretty well. This one has a double bent downtube, which really helps solve some of the angle issues with the lugs and BB shell. It's a slight bend, so not obvious when you first look at the frame and I think a bottle cage on the downtube will almost make it disappear. I had to build up a custom roll-bender to make it happen though. I'm fairly pleased with how it worked, but I'll probably have to switch to non-butted downtubes to really maximize the smoothness of the bends.

My first shipment of fork crowns is also on the way, might arrive today infact. I'm pretty psyched to see those, hopefully the manufacturer nails the tolerances slightly better than on the prototypes. They assure me they have... Pictures will be posted once I get them.

In addition to the entertainment center (mentioned above) that I need to get rid of, I'll soon have an extra set of drums which I don't have room for. As part of a fantastic barter, I'll be getting a new (to me) set of Grestch drums in exchange for a frame, which means my Yamaha's need a new home. If anyone is interested in set of very nice Yamaha Stage Custom Fusion drums (10, 12, 14, 22" with a 14 x 5 steel snare) in Cranberry birch finish, let me know. I'm going to need the space. They're about $1000 worth of drums, I'd let 'em go for $600. email me for more info or pictures.

Nice job on the entertainment center. I'm trying to remember if you're the fellow who was making snow in your backyard a year or two ago. I scanned through you blog and didn't see anything. Mayhap, I'm confusing you with another B. Brown who makes bikes and snow.
Enjoyable read (but glad I don't live next door to you, I'd feel like a real slacker observing all of your productivity [I can hear my wife already making the comparisons]).