So apparently the Guthrie has a daily internet scanner that crawls the web looking for any new text with the word Guthrie in it. I know this because I met with the nice fellow from the Guthrie again yesterday to actually get the correct tour of the space and he was pretty embarrassed because appearantly many of his co-workers were filled in on my last blog entry. I think I've used the word Guthrie enough in this first paragraph that this entry should also show up on their daily scanner, so I just wanted to say, sorry James, but your tour was fantastic and someone over there should give you a raise for having to put up with people like me! Thanks for the opportunity to play.

One more note probably worth saying, for those thinking about coming to the show Friday, we'll be up in the Target Lounge. When you walk in take the very long escalator to your right up, then take a left at the top and we'll be in the lounge area just up on your right.

The weather was crazy nice here the last couple days. I think it hit 70 yesterday. I was able to sneak out for a short ride yesterday in the warmth, it felt great riding in shorts and short sleeves. I was hoping to ride a little dirt as I love fall mountain biking, but they had Battle Creek closed again this week for a controlled deer hunt, and I didn't feel like going farther that that, so I took out the road bike. I've been really diggin' my road bike again, now that I finally figured out what was creaking on it. All summer it had this creak, once per pedal stroke, seemed like the BB, but amazingly it would usually go away when I got out of the saddle. I must have greased everything in the drivetrain, seatpost, saddle and pedals to no avail. Things like that really bug me, I mean enough that I didn't even want to ride the bike. It's not necessarily the sound that bugs me either, it's the principle. It's like a sign that my bike isn't perfect, and I can't figure out how to fix it. That bugs me to no end because I like to think (yes, I have some ego issues) that I can fix anything, especially on a bike.
Well, I finally found the creak, it was the stem clamp on the steerer. All the bolts were dry just the slight shifting my weight when pedaling was enough to make it creak. Greased everything up and it's been beautifully silent since. I love a really quiet road bike, it just seems right.

I probably don't have to tell anyone reading this, but this weekend: 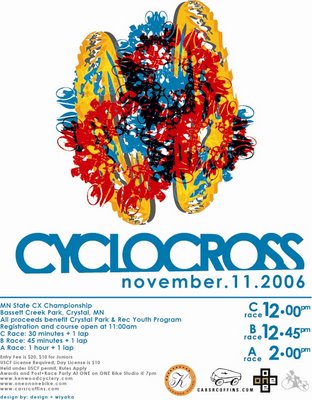 This is it, the last MN race of the year, the State Championships. Git yerself down to Basset Creek Saturday to race, volunteer or just spectate. It'll be bigger than ever and you'll be kicking yourself until next Buck Hill season if you don't show up.