So much to write, so little time.

So much has happened since the last time I was able to write here that I don't know where to start. I've been really working in "wrap it up" mode. There have been way too many projects floating around the shop and the house that are almost done. I want them totally done and gone, not almost done...

I've delivered almost all the repaints that I had in the shop, which cleared out a nice bit of room. Felt really good to finally get this Ritchey frame back to the Vitch since it had been sitting in my shop since before Kenwood closed up. He's a patient guy, but really I don't like having any projects in my shop that long.

Of course the downside is that as soon as I got rid of 4 repaints, I got two more in. Guess that's business, there's always work waiting.

I'm almost done with another frame build as well. The customer will be providing me with a few critical components for the frame so that I can wrap up the final fit of the chainguard (yes I'm making a chainguard from scratch for this one). I know he's probably anxious to get the final product so I'm eager to get that frame finished up too. 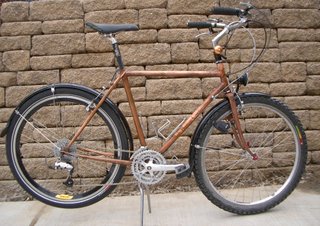 The really big news is that the copper plated nature bike is heading to it's final destination, the lucky lady out east who still hasn't seen any hint of what it looks like. This one has been a long time in the works, but I really hope she feels the final result was worth the wait.
Here's a shot of the whole bike. Now I didn't have all of the actual parts for the build, those last few items will go on when she get's it. So the front wheel, seatpost and saddle are not correct, but I needed something for the photo's. It'll look much better with matching wheels, and a brooks saddle! 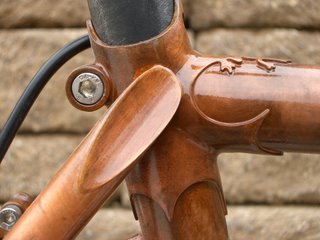 Really the beauty of this bike is in the details. The copper finish really lets them all shine through as it shows all the brazing and filler.

I really love the seat-cluster and how that whole area came out. 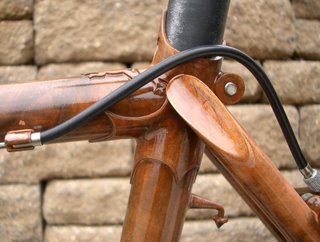 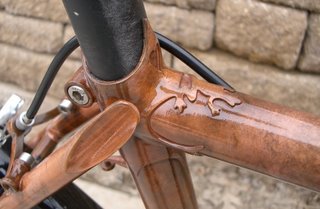 Below is a shot of the BB area and the kickstand plate. I'm not a big fan of kickstands for most bikes, but this is a full-on touring bike and those double leg kickstands are pretty sweet for holding the bike up while you dig through your panniers. 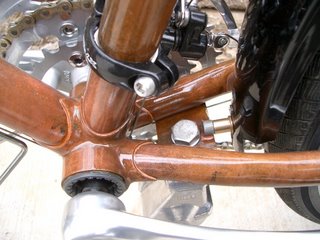 Getting my logo on the downtube was one of those things that I really put a lot of thought into. After seeing how cool and antique the copper was looking I wanted to make sure the logo fit in, a regular modern decal just wasn't going to cut it.

So I applied mask of my logo to the tube, then used a chemical etch to darken the steel in the shape of my logo. After that I was able to apply the copper right over and get this cool antique look. I just love how textured the copper came out and the light and dark areas around the lettering. In many areas the finish look more like weathered leather of mahogany than metal. 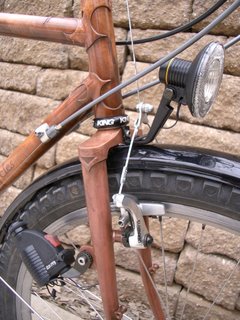 As I said earlier, this is a fully loaded touring bike. Lights were definitely a requirement. In this case, the fork is designed to take a B & M dynamo and headlight. It's actually set-up to take either a right of left hand dynamo for maximum flexibility, and there are about 5 ways the lamp could be mounted to accommodate many rack configurations. Again, I love the way the copper naturally darkens around the lug edges, highlighting all the carving that went into this bike. 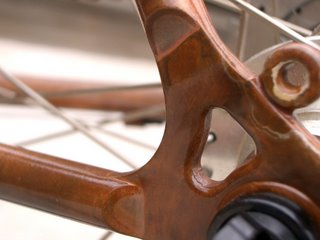 The dropouts are pretty standard BBC issue, but it's worth a few pictures of how the brass filler shows through the plating. Initially I was concerned that this would look bad, but in the end, I think it only adds to the overall appeal of this finish. The color around the eyelet is actually a small amount of copper oxidation that occurred prior to clear coating. I expect the copper will oxidize slightly even under the clear, but it will be a slow process and should only add to the charm. 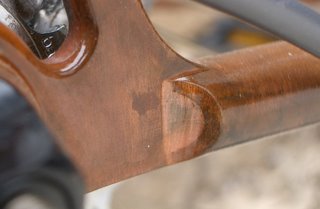 One thing I will say is that this is not a finish to be applied to sloppy brazing. As you can see, everything shows. Here is a shot of the driveside dropout. Filler has to be only where it's supposed to be or you'll see it. If you click on the photo to enlarge it, this pictures shows the texture of the copper quite well.


In other news, I'm still hacking and coughing constantly. This thing just won't shake loose, but I know several other folks with similar problems and it sounds like the cough hangs on for about 3 weeks. yuk. I still managed to get in a couple of rides this weekend despite hacking the whole way. Did some hills with the kenwood boys Saturday, during which time I discovered that I still felt pretty weak from being sick. Then went out Sunday on what should have been an easy ride, but due to my tired legs and a stiff headwind I really felt the hurt.
That ride pretty well took the wind out of my sails the rest of Sunday, so I layed low and tuned up an old commuting bike for a friend and then installed a couple sections of trim upstairs in the new room. That was about all I had the energy for.

Talk at you later,

Got your email too... Amy's gonna FREAK when she sees this,

You smacked this one OUT OF THE PARK.

I still love that little frog. That would have looked cool if it was painted up all green with spots and stuff - against the copper backdrop? Not that it doesn't look cool now, obviously! And, that logo looks fantastic! Would something like that work with a regular paint-job, you think? :)

Scott, your wife is gonna flip! I'm curious - how/why did you decide to go with a sidewall- instead of a hub-dynamo?

I'm still stuck in the 1970's... the look, the feel, no helmet, tennis shoes for riding, jeans or shorts, white socks. No spandex, yada, yada.

I guess I just like a mix of mostly old-tried and true with a big toe into the new, better & modern.

Somewhere in all that, hopefully is an answer!

Can't wait to see pics of your new ride too... bet it's gonna be super cool!?

Oh, it's gonna be super-cool! It's gonna have "the bitchenest chainguard in MN" right Bob? :D

I can totally respect wantin' the old-school vibe. Back in the day I rocked the POS sidewall dynamo. 'Course, it wasn't made by B&M!

Don't tell anyone, but I'm planning to debut pics on my blog with the new ride. And I've been releasing some specs as things get decided. I'm pretty excited about it.

Holy COW! That is one gorgeous bike!!!!

You can see more of it at my blog-by clicking on my name in this post [I'm the fella that had it made for his wife... ].

Dear lord sweet cheese & rice scott... if I did something like that for the wife I'd likely be a hero for life... NICE! BB, that's one of the prettier paint jobs I've ever seen and the lug work is gorgeous! How do you feel about longtails?