Well it's been a while since I posted again. I've just been too busy to even think about writing here.

I was really hoping to kick butt this weekend on working on the house, I feel like it was more the other way around, the house kicked my butt. I took Wednesday off to work on the yard before the impending snow of Thursday. I spent the day moving dirt, lots of dirt. I shoveled and raked about 10 yards of it around until I was satisfied with the grade of the yard. Then it snowed.

Got about 3-4" of it here, but it melted off about 2 days later, so no real big deal. However our prospects for laying sod this fall vanished with that cold snap. So now were stuck with a yard full of black dirt for the winter. We got another warm spell yesterday, so I took the afternoon off and spread straw over the dirt to prevent erosion, and then installed a silt fence along the road. That may sound easy enough, but lemme tell ya, digging a trench and pounding in silt fencing in the rain at night in a complete mud bog isn't much fun. The dirt was completely saturated from the snowmelt, so with every step I sunk in about 6". yuk.

Hopefully the dirt will stay in our yard now though once spring comes and we get real snow melt. We'll definelty have some re-grading to do though as the dirt will undoubtedly slump down to the bottom of the hill.

Thursday was turkey day, and my Brother's in-laws were kind enough to invite us over for dinner. That was great, Mike (Katherine's Dad) is one heck of a chef. Thanks for the invite Tharps! At that point our kitchen was still covered in plastic since we were still painting the ceiling, so cooking was out for us.

Friday was the first time I can remember spending the entire day shopping on the day after Thanksgiving. Sadly enough that was not our plan, I had hoped to starting laying the subflooring. But we needed some supplies and once we had shot the whole morning/early afternoon getting the sink base cabinet and light fixtures for the bathroom, we decided to just get the flooring, paint and a few other items and kill the rest of the day shopping. It sucked. I hate shopping, always have. I used to not mind shopping for home improvement stuff, but this year has pretty much jaded me to that too. 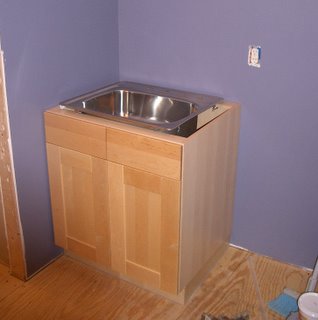 Saturday I finally got to do some work, but we didn't really get into our stride until the afternoon. Beth worked on painting while I worked on subflooring. By Sunday, I had all 18 sheets of subfloor installed. That part actually went far better than I expected, the hardest part was carrying each sheet upstairs once I cut it in the garage. After that was down I started on the bathroom, installing what I could before the flooring goes in.

Here's the laundry sink base installed, with the sink just sitting on top. The washer water connections are inside the sink base, so I had to do some plumbing once I got the base installed. Just have to cut the countertop to length and install the sink in it, then this part will be good to go. 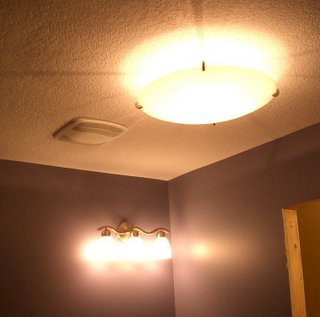 As I mentioned, I installed the light fixtures too. Those don't lend themselves to good photos with the lights on, guess I should have just taken the picture with the light off... As with most of this project, nothing went smooth. I check the electrical prior to wiring up the ceiling light to make sure the wires weren't live. To my surprise, they were, and the switch didn't work. Well, after about 2 hours of bangin' my head against the wall trying to find the problem I finally used a different tester and it worked fine. Turns out my meter had broken and was giving false readings. sigh. Then the exhaust fan wouldn't work. This one wasn't a bad meter, it was a bad motor in the fan. That really pissed me off since I know it worked before the sheet rock was installed, I tested it. I had to go back up in the attic and remove it, bench tested it and sure enough, the motor was bad. Back to Menards for a new one, then back up in the attic to re-install it. again, sigh.... 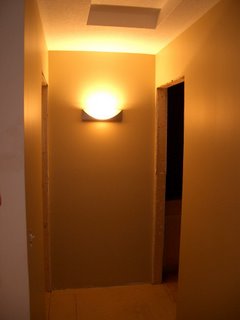 The one light that worked with no glitches was the hall light. Looks nice too. This one is a fine Ikea product. I find it amazing that they can offer products even cheaper than the cheap crap at Menards, and amazingly enough it's actually slightly (just slightly) better construction. I mean really, all this stuff at every home-improvement store is made-in-China-crap, but Ikea's crap is slightly less crappy (how many times can you say crap in one sentence?). You can see some of Beth's paint work too, the hall is a nice taupe (I have no idea if I'm spelling that right) color, the bath is a blue-violet-gray kinda thing that looks swell, and the main room will be a rusty-dark-orangish color.

You can tell a woman now lives in the house which I once lived in alone. There are colors on the walls. If you've ever been in our house, you might find it humorous that the old part is basically all beige, and the new part is basically all colors. Guess it's that venus-mars thing, but I don't mind, the colors are definitely more interesting. I was just too cheap and lazy to repaint the all-beige color scheme the house had when I bought it. Slowly but surly the old part of the house is getting more colors too. 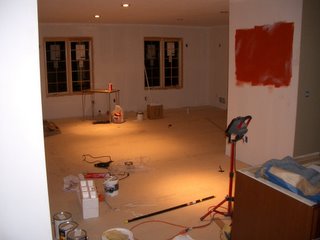 And finally, here's the main room. Hasn't been painted yet, but I'm sure it's next up. The color swatch on the wall is the main suspect in hunt for colors. The ceiling is finally painted to a respectable finish after three tries (don't ask, it just didn't work out). The recessed lighting looks good, and the subfloor is all down in here. We actually just ordered the hardwood that will extend from the kitchen into part of this room last night. We'll probably be getting the carpet on order as soon as the painting is done (and once we figure out how to pay for it!). I'm pretty excited at how much it is coming together, but to be honest, I had hoped to have all the flooring in by now and the bathroom put together. Oh well, I guess schedules exist to be missed (at least in my case).

I'll try to get a picture of the finished retaining wall if I'm ever home during daylight hours and not swamped with work (doubtful).

Not much shop progress to report. I've got a handful of frames ready for painting, so I guess I better get a paint set-up together soon so I can spray again. I did get my phase converter wired up for the horizontal mill, so the motor works now. But I'm waiting for the drive belt to come before I can try it out. Did some other machining work on the vertical mill, it's great. A world of difference from the table-top in terms of stability. I do still miss the geared head on my old one, as speed changes were quicker, but I'll live.

I guess I did slip in a couple of quick repairs on stuff, and I'm putting the finishing touches on that nature bike, but that's about it. No riding whatso ever, that sucks, but the weather hasn't been great for that either. The good news is, I'm starting to see the light at the end of the remodeling project. Once the interior is livable, I shouldn't have to work on this every night and every weekend, I might even have a life again. Maybe.