I haven't had the time or the inclination (at least not at the same time) to write here lately. I was out of town for 5 days at Thanksgiving, then got sick at the end of that trip. Spent most of the next week in bed, then had to leave town again. Fun stuff.

But that's not to say that a lot hasn't happened. Sure being sick and out of town slows me down, but I've still managed to get a few things done.

First off I had the good fortune to finally get to meet up with Doug Fattic over Thanksgiving. He lives about 25 miles away from my in-law's in MI, so while we were over there, I made a trip over to his shop. For those who don't know, Doug is another framebuilder, located in Niles MI. His work all looked great, and he's known more for his painting skills. We spent quite a bit of time talking paint since there are so few that actually do paint. He's got a pretty killer set-up for a shop, he owns 7 acres of land right in town with a lovely old farmhouse on it. Then there's a 1100 sq. ft. concrete out-building a couple hundred feet away in which is his shop. So his commuite is a short walk out in the yard.
He's got a tremendous amount of equipement sqeezed into that building too. I always thought I was kind of an equipment whore, but he's got me beat by a good amount! Toys everywhere, and he knows how to use them. I guess that's part of teaching framebuilding classes, you need to have stuff for multiple people to use at the same time.

It was a great visit, I really enjoyed talking to Doug and hearing some of his stories from England in the 70's where he learned to build. He's a great guy and for anyone looking to take a framebuilding class, I would highly recommend his. He knows what he's doing and has a good teaching background.

I finished up the first Route 29'er (that's the name of the production bikes) prototype and it's out for powdercoating right now. I'm pretty axious to see the results. It was a tough decision to go with powdercoat because in general I'm not a fan of powder over lugs. The powder finish is thicker and tends to obscure the detail on the lugs. However it's also very durable and considerable cheaper/faster than wet-paint which is pretty attactive for this application. I've got most of the graphics worked out for the decals, so I'll have those on order soon.

I promised the owner of the 953 frame I'd put some more pictures up here of the completed frame, so I'll have some next week. I'm etching in the logos on the frame instead of using decals. It looks really nice.

Headbadges! Yes, they came in early. Again, I'll have pictures soon, but they're nice, cut stainless with my overlapping "B" logo. Should be a nice touch on future frames.

Engraving. I am finally figuring out how to use my Pantograph machine and it's working pretty well. I engraved the serial Number and owner's name on the BB shell of my most recent build with good results. I'm still working on figuring out how the cleanly engrave wide block letters so I can recreate my logo on more items, but I'm getting close. I think once I get my micro end-mill adaptor made, that should solve my problems. Again, pictures soon. I made up a nice little jig to hold BB shells on the engraving table, now I need a small rotary table on there, so I can put my name on the raised dropout faces! 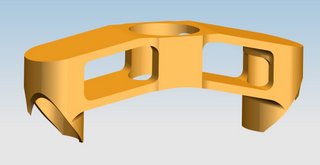 Crowns: I made more modifications to my crown design based off the prototype, thickened up a few areas, and increased the size of the fork blade ports slightly to fit more blades. I also shortened the overall height, which I feel makes it look better. I also changed the width, so the front and back of the crown are parallel with a small radius out at the steerer tube area.

I'm hoping to crank out a couple more steel bed frames this weekend. People have been seeing the one I made for Beth and myself and liking it, so I'm making more. I'll probably add some pitcures to the website soon, under a class of "other stuff I build". There's a growing number of things that fall into that category, and I think I'd like people to know about them. I've got another entertainment center to build for our living room coming up and a few other small ideas I'd like to see come to fruition.

Are bike builders all audio nuts too? I've noticed this trend, I know Curt G is into nice audio stuff, while I was Doug Fattic's shop I noticed some ADS monitors in the shop, which are aweful nice for an industrial setting. It's one of my older passions. I started building speakers in college and still enjoy it (although I don't have much time for it now). My Jetta has a pretty swell combination of parts in it, but recently I had been really annoyed at mystery noises and speakers cutting out. So I finally took things apart one night last week and found a loose connection in one of the cross-overs for the front components and a loose voice-coil dust cover in one of the speakers. A few minutes with the soldering iron and some super-glue and things were instantly improved. I'm still amazed at the sound from the ADS 320 components I've got in there. They're 17 years old now and still have the clearest sounding vocal range of anything I've heard. Had to repair the flexible surrounds twice in that time, but otherwise they seem to hold up great, that's amazing for a set of speakers that have been in and out of 4 different vehicles now.

I've been having issues with our home stereo too. Actually not the stereo, but one amp in particular. I've got an older Audiosource amp in there running the masive 4th order bandpass sub I built into the bottom of the entertainment center. Well, somewhere inside that amp is a power relay that isn't funtioning right, so it only turns on occasionally. I hear it click in and out when it actually decides it wants to turn on, but I can't find the stupid thing. Once the amp is on, it works great, but it just doesn't come on very often. I need to tear into it a but further, but in the meantime I found another solution. I picked up a set of Def-tech 2002's off ebay which were in terrible cosmetic condition, but all the drivers and amps are perfect. Thankfully that made them sell for a song. So I'll be refurbing those and putting them in the living room. That solves 2 problems, the first if the mystery amp power thing, since these have built-in poweder subs, I won't need my external sub amp. Secondly, we both want a new entertainment center, but I've been hesistant to build it because the sub for our existing sound system is incorporated into the base of our existing entertainment center. I was going to have to cut up the existing one and remove the sub, than make a new, nice looking enclosure for it and place that in the room. With the sub built into the new speakers, that problem is solved too.
Anyone local want a fairly nice hand-made solid Aspen entertainment center with a really good sub suilt into it? you'll want a new amp : )

I promise pictures next week. Really.

That bed frame looks familiar! I want a cut of profits!