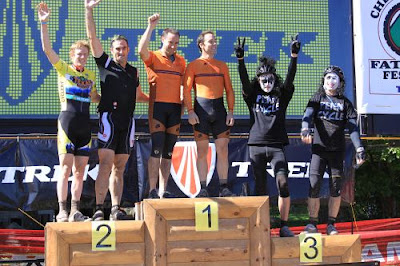 Man it was a great race. Keven and I only managed to get in 3 rides together on the tandem prior to Sat, but I think we felt like we'd be alright. We both were pretty casual about the race even through the start, I don't think we figured we'd really do much out there. Particularly after finding out at the start that Schmeichel and Bergman we riding tandem as well as Sandburg and Schow. Those guys can put out some horsepower and we figured between them and the Eppins we'd be fighting for 3rd or 4th.

Right off the start I was surprised how easily the front of the pack showed up. Eppins were out front leading and we easily rode the outside edge of the pack moving up near the front. As we went into Rosie's I heard a huge gnashing of gears and saw a yellow tandem pulling off with a mechanical. Pace was pretty fast through rosies and as we started the climbs I could feel we were in a good spot, just behind the Eppins but in front of the others. Then a really unexpected sight, the Eppins on the side of the trail with a derailed timing chain, we scoot into the tandem lead.

I've never been this far up at Cheq and the pace was pretty much what I expected, fast. But we were rolling well and I felt pretty good keeping the pace. About 20 miles in I was starting to feel my quads, not bad, but enough to know I probably needed to cool things down to save some juice for firetower and beyond. Fortunately Keven still had a lot of gas in his tank, so I backed off a touch and we still maintained. About the same time the Eppins rocketed by like we were standing still. Time to get going...

We kept them in sight for quite a while, they were leading the pack in front of us for the next five miles or so. Keven kept the gas going and we kept moving well, but then we hit the mud. Things got slick and we kept moving fast, too fast. I layed it down somewhere before firetower. Full speed front wheel washout in a mud rut, suddenly there was a tree coming at us fast! We got up pretty quick, Chef was good to go, I knocked my knee pretty good on the top tube, but felt fine. The bigger problem was the awkward landing kicked my quad into cramp mode. worked on spinning it out while chef put down some good power. We played it a bit cooler on the corners from here on out.

Firetower came fast, for some reason I thought it was about 5 miles from the end but it's 10. So there we were, I'm still cramping and we hit the climb. Ran out of traction early so we got off and ran. Chef took the bike while I ran out the cramps. Amazingly it seemed to work, we ran the whole climb and I felt better by the top. The next 8 miles is big rollers and lots of climbs. We worked it well, rocking the downhills and maintaining on the climbs. Finally the last fast road section was incredible. Probably the fastest section I've ridden on tandem. We made up a lot of places and were flying by people at about 35mph. Crested Mt Telemark and flew down the final descent into Telemark. The last turn into the finish is incredibly wide, but I still had to scrub some speed to make it. Kept it going into the chute. 2:26:30. It was another 17 minutes till the next tandem. Nice riding Keven, thanks for carrying me out there!

Can you smell it? That's 'cross in the air, I can feel it every night coming in the open window in my room. That means cross bikes, finishing up two this week. 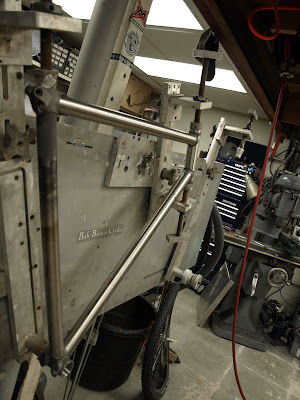 2010 is looking like it's going to be a banner year for cx in MN, especially when it comes to local framebuilders. Won't say more than that, but look for awesomeness out there.

But before cross we gotta get through Chequomegon. I'm primed this year, just came back from a great race at the Dakota 5-0 labor day and I've got a hot-rod stoker for the race this year. Going big on tires this year with the 2.4 up front: 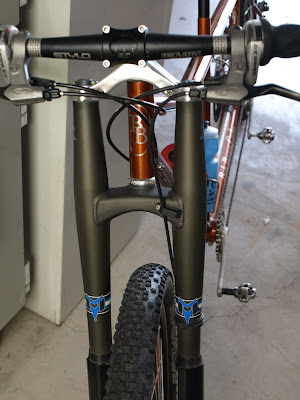 With the maverick fork, it looks like I'm on a moto bike when I look down! Rawk.

And since it's been a while since I posted, here's a race recap from the Dakota 5-0: Singlespeed, singletrack heaven, bump fast decent rigid bike hell. I'll be going back, but probably with some kind of boing on my bike, my back still hurts from the rigid fork. Killer race though, do it.